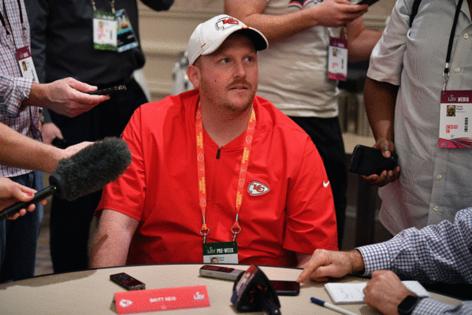 The criminal trial date for former Kansas City Chiefs assistant coach Britt Reid, who faces a felony charge of driving while intoxicated during a crash that injured two children, has been scheduled for April 18, a Jackson County judge ordered Thursday.

At a hearing held virtually Thursday morning, Judge Charles McKenzie said a jury is being selected from a pool of about 70 people. The trial is expected to last a week.

The 15-minute hearing was primarily procedural, with no motions or evidence being presented. Reid and his attorney, J.R. Hobbs, appeared via video conference.

Hobbs told McKenzie that he is hopeful that case might be resolved without a criminal trial.

"But to set a trial date, we've consulted with one another with certain witnesses as well as the courts," he said.

Hobbs said he expects to call traffic reconstruction and toxicology experts to testify on behalf of Reid, who is the son of Chiefs head coach Andy Reid.

On Feb. 4, Reid struck two cars on the side of an entrance ramp along Interstate 435, near the team's practice facility, prosecutors alleged. The crash injured two children, including 5-year-old Ariel Young, who suffered a traumatic brain injury.

Reid, a former linebackers coach, was charged on April 12. He was driving 83 mph two seconds before the collision, according to prosecutors. They also allege that he had a serum blood alcohol content of 0.113 about two hours after the crash, according to court documents. The legal limit is 0.08.

Following the crash, Reid allegedly admitted to police at the scene that he had been drinking. A police officer noted that Reid's eyes were "bloodshot and red," according to charging documents.

In 2008, Reid pleaded guilty to driving under the influence of a controlled substance in the Philadelphia area.

The child suffered swelling and bleeding in and around her brain and was in a coma for 11 days. She was released from a hospital on April 2, but was not able to walk or talk and was being fed through a feeding tube.

The crash occurred three days before the Super Bowl, and the Chiefs then placed Reid on administrative leave. The team allowed Reid's contract to expire without renewal, effectively ending his employment with the organization.

For the Jets (3-9) to have any chance of salvaging something out of another miserable season they need the defense to play better in this final five-game stretch, ...Read More

He says it’s more serious than the bone bruise that the Cowboys initially reported but he ...Read More

Oh, that previous team? It was the Patrick Mahomes-...Read More

“Coach [Dabo] Swinney has been a great resource for ...Read More

Week 14 kicks off with two teams that are one game off playoff ...Read More