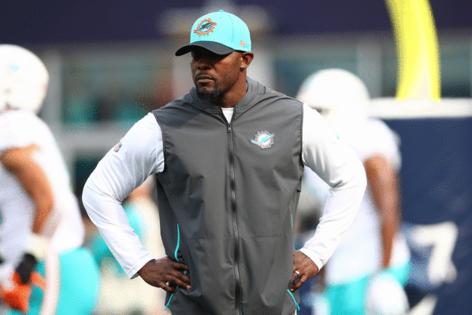 The Miami Dolphins’ new offense under co-coordinators George Godsey and Eric Studesville worked as well as one could have imagined — on the opening drives of the two halves.

Beyond that, there wasn’t much going offensively in what was still enough to pull off a 17-16 win on Sunday against the New England Patriots at Gillette Stadium to start 1-0 in the AFC East.

With the division-favorite Buffalo Bills coming to Miami for the Dolphins’ home opener in Week 2 — and coming in looking to prove they’re not the team that struggled in a 23-16 defeat against the Pittsburgh Steelers — the Dolphins will have to get more consistent production.

“We try to execute on every drive,” said coach Brian Flores. “It just so happens, in this particular game, it happened on our first drive of the game and to open the second half. I think we need to do a better job executing in between. I know we are going through those corrections right now. I don’t think there’s any real correlation. We try to move the ball and be productive on every drive.”

When a team comes out of the locker with a successful initial drive and then sputters in ensuing series, the thought is the first drive was scripted and then adjustments were made by the opposing defense.

“I think we just came out, knew what we wanted to do, knew the plays that were going to be called, and we just executed,” said running back Myles Gaskin, who ran for 28 yards on five carries in the opening drive and finished with 49 on nine attempts Sunday. “We prepared all week for it, and I think we were really hyped to be out there and ready to get this ball rolling.”

Quarterback Tua Tagovailoa denies there being a script, though.

“I wouldn’t say our opening plays are scripted,” Tagovailoa said postgame in Foxborough, “but it’s more so we kind of know and understand how the game is going to be as far as our personnel being in there and what to expect as far as their defensive personnel being out there, and you can kind of gauge what plays are about to come into the headset.”

Whatever it was, Miami’s offense clicked best on the drive that it had all offseason to prepare for ahead of Sunday. The Dolphins got rookie wide receiver Jaylen Waddle involved early; they ran Gaskin effectively; Tagovailoa got a quick pass out to running back Salvon Ahmed in space that went for 18 yards, and Tagovailoa pulled the ball on a fake handoff to Gaskin to run in the touchdown himself. Beautifully orchestrated.

“And then New England made a couple of adjustments that kept us from moving the ball on another drive,” said Godsey on Tuesday. “I think there’s a lot of factors in that. Both sides are playing this game behind the game. They did a good job of adjusting, and then it took us a little bit to get adjusted from there.”

Dallas Cowboys linebacker Keanu Neal has officially been ruled out Monday’s game against the Philadelphia Eagles after testing positive for COVID-19.

Neal was initially placed on the NFL’s COVID-19 list as a close ...Read More

PITTSBURGH — Pittsburgh Steelers outside linebacker T.J. Watt will not play against the Bengals on Sunday afternoon at Heinz Field. Watt, who injured his groin in the 27-16 loss to the Raiders last week, was originally ...Read More

LAS VEGAS — Looking up at the sports board inside the MGM Grand, there’s something startling to see if you can see past the surrounding strain of insanity — past the bright lights and flashy fluff, past the glitter ...Read More

The Miami Dolphins have placed starting quarterback Tua Tagovailoa on injured reserve, which gives his broken ribs four weeks to heal before he’s allowed to play in another NFL game.

Because of the NFL’s new rules ...Read More

PITTSBURGH — You know what I never want to hear again?

Here were Mike Tomlin's Steelers, playing their first home game since the coach capitulated on a late fourth-and-1 in a playoff game,...Read More

SEATTLE — There is no shut-down mode for Jamal Adams. The Seahawks safety is always on.

It's the one thing — his high-intensity ...Read More