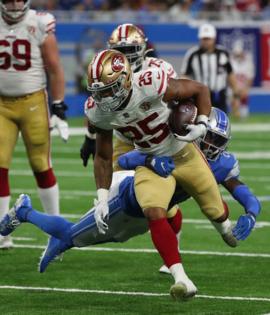 Don’t beat yourself up too much if you left points on the bench.

Conversely, don’t pat yourself on the back too hard if you made a great call.

It’s all about to change as a new cast of players breaks out in Week 2. That just goes with the territory this early in the fantasy football season.

Nevertheless, we all have started the rush to the waiver wire looking to ride the hot hand or land players who could take advantage of injuries.

Unfortunately, some candidates, such as New Orleans Saints wide receiver Marquez Callaway and Baltimore Ravens running back Ty’Son Williams, already have been claimed in most leagues, so they won’t be featured here.

For other players who flashed in Week 1, look deep into their situations before spending a waiver-wire pick on them.

“Aiyuk’s only been back for a week after he tweaked his hamstring. We wanted to be smart with that,” coach Kyle Shanahan said via the Bay Area News Group.

Week 2 is about prioritizing the free agents who are in high demand versus prospects for whom you can afford to wait a week or two to see how their situations pan out.