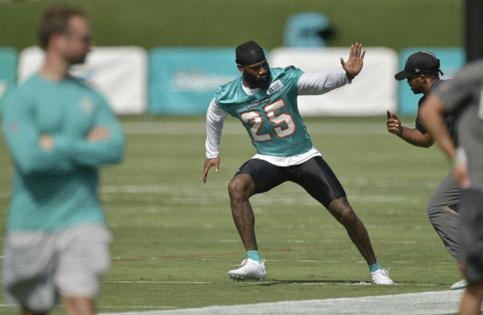 MIAMI GARDENS, Fla. — Xavien Howard seems to realize he’s at the mercy of the Miami Dolphins.

At least for now.

Despite the cornerback’s request to be traded earlier this week — and thorough explanation on an Instagram post about the displeasure he feels about his contract situation — he’s aware there’s a strong possibility he might have to play the 2021 season in Miami.

Or at least start the season here before seeing what happens during the NFL October trade deadline.

“I’m here,” said Howard, who requested that the team re-work the six-year deal he signed in 2019, which is supposed to pay him $77.2 million.

Howard did not clarify if Miami and his agent, David Canter, continue to hold discussions about reworking a deal that has three years left on it after this season. But he didn’t seem too pleased with the tone of the dialog that’s ongoing.

“I hope it gets better. It’s a process. I’m hearing this and that, but nothing is getting done right now.” Howard said. “Right now, I’m just out here every day supporting the team and working.”

When asked how the Dolphins can fix the tension between him and the organization, Howard said, “it’s up to them,” and shrugged his shoulders.

The usually mind-mannered 28-year-old hasn’t been talking much at camp to anyone but his teammates, who have publicly shown him support.

According to league sources, a handful of teams have contacted the Dolphins about acquiring the two-time Pro Bowl pick, who has pulled down 22 interceptions in 56 games the past five seasons. But Miami’s price for the 2020 Defensive Player of the Year candidate, who pulled down 10 interceptions last season, is supposedly “too steep.”