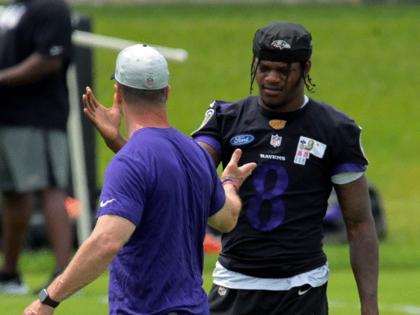 BALTIMORE — Ravens quarterback Lamar Jackson needs to hire a professional familiar with the inner workings of the NFL before his career starts moving downward or possibly implodes.

Without question, he is the most explosive offensive player in the game, but he has no one around him to provide sound advice about his off-the-field behavior or even the multi-million dollar contract he is negotiating with the Ravens.

Jackson is a nice guy, certainly not belligerent or nasty, but lacks discipline. The Ravens have tried to provide the 24-year-old star with the proper guidance and instruction, but the inner circle around Jackson keeps everyone at a distance and the fourth-year quarterback sheltered.

He is an overprotected kid.

On the first day of training camp practice Wednesday, Ravens coach John Harbaugh announced that Jackson tested positive for COVID-19 for the second time since November. According to Harbaugh, whose team is considered one of the favorites to win the Super Bowl title in 2021, about 90% of his players have been vaccinated, as well as the entire coaching staff.

While the team hasn’t said which players are vaccinated, Jackson’s testing schedule since arriving at camp last Wednesday — he’s been tested daily whereas vaccinated players need only be tested every 14 days — suggests he’s among the minority of players who have not had the shot yet.

COVID-19 numbers are spiking around the country and the NFL recently put out a memo stating that if games are postponed because of an outbreak of unvaccinated players on one team, that team will forfeit the game and players on both teams with not receive game checks.

And since the Ravens were fined $250,000 and had 23 players spend time on the reserve/COVID-19 list last year, you’d think someone would get in Jackson’s ear. But if his inner circle says no, Jackson will agree, regardless how selfish the move.

There is no guarantee whether Jackson had been vaccinated or not that he wouldn’t have tested positive again, but it would have improved his chances as well as those of his teammates and others who work in the team’s Owings Mills complex. The benefits of these vaccines certainly outweigh the side effects.

In June, Jackson declined to say whether he was vaccinated or not, calling it a personal decision.