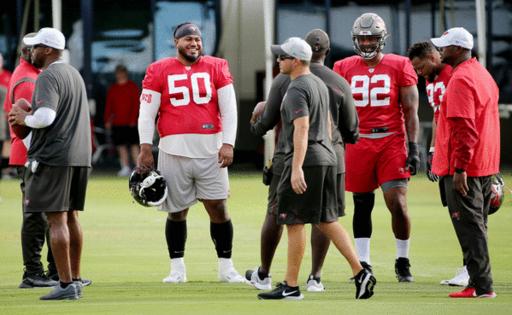 TAMPA, Fla. — The Bucs were still buzzing about the play Vita Vea made in practice two days later. In time, it may become part mythology.

“I remember the exact play,” linebacker Devin White said. “How could I not?”

“We were just talking about that,” defensive tackle Khalil Davis said. “The younger guys, when we watched ... it got all of us fired up.”

The 6-foot-4, 346-pound Vea has always been an enormous talent. But with plays like the one he made Monday, he soon will turn poundage into profit.

Here’s how it went down during an 11-on-11 portion of practice. Running back Ronald Jones, who had a 98-yard touchdown run at Carolina last season, took a pass in the flat from Tom Brady and turned upfield.

There was a lot of open grass in front of Jones, and it looked like an easy catch and run for a first down, most likely more. Much more.

But seemingly out of nowhere, Vea turned and sprinted down the line of scrimmage, chasing down Jones from behind for little or no gain.

The sideline erupted. The players on the field hooted and hollered and slapped Vea on the helmet.

Jones looked as if he had been flattened by some phantom tackler.

“When we saw that, it was like, ‘My goodness. A man that big to be able to run down a running back,’” Davis said. “Whew. It was awesome to see, but it just reminds you how different of a player he is.”

Dallas Cowboys linebacker Keanu Neal has officially been ruled out Monday’s game against the Philadelphia Eagles after testing positive for COVID-19.

Neal was initially placed on the NFL’s COVID-19 list as a close ...Read More

PITTSBURGH — Pittsburgh Steelers outside linebacker T.J. Watt will not play against the Bengals on Sunday afternoon at Heinz Field. Watt, who injured his groin in the 27-16 loss to the Raiders last week, was originally ...Read More

LAS VEGAS — Looking up at the sports board inside the MGM Grand, there’s something startling to see if you can see past the surrounding strain of insanity — past the bright lights and flashy fluff, past the glitter ...Read More

The Miami Dolphins have placed starting quarterback Tua Tagovailoa on injured reserve, which gives his broken ribs four weeks to heal before he’s allowed to play in another NFL game.

Because of the NFL’s new rules ...Read More

PITTSBURGH — You know what I never want to hear again?

Here were Mike Tomlin's Steelers, playing their first home game since the coach capitulated on a late fourth-and-1 in a playoff game,...Read More

SEATTLE — There is no shut-down mode for Jamal Adams. The Seahawks safety is always on.

It's the one thing — his high-intensity ...Read More