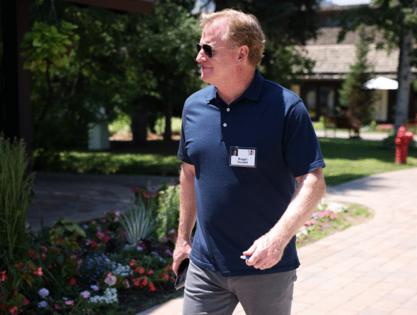 After Chung said he was told he “wasn’t the right minority” during a job interview with an NFL team, the league launched an investigation before releasing a statement July 1 that deflected Chung’s claim.

On a conference call with reporters Monday, Chung expressed his disappointment, labeling the NFL’s statement as “a little misleading.” He also is seeking a meeting with NFL commissioner Roger Goodell.

In its July 1 statement, the league said, “After multiple discussions, including with Mr. Chung and his representative, we were unable to confirm the precise statement that was made, or by whom and under what circumstances any such statement was made.”

Chung, who is Asian-American, contrasted the league’s phrasing of “multiple discussions.” He insisted he had only a brief follow-up conversation with a league representative after he brought his claim to light during a panel discussion with the Boston Globe in May, which was Asian American and Pacific Islander Heritage month.

Chung read an opening statement before handling questions in his 30-minute session with reporters.

“The statement that was released was misleading following the investigation,” Chung said. “I’m not interested in outing anybody. I think that’s insignificant and irrelevant to everything going on right now. It’s just the mere fact that statement was made to me, it brought up a lot of questions. My goal in this is to understand whether Asians are considered a minority and the purposes of the NFL’s policies because I feel there’s legitimate confusion on a team level of that word they use: minority. When their statement was made, it was shocking. That’s why I’m coming out and talking about this today.”

He continued: “I want clarification on what this actually means. Are Asians considered a minority when it comes to the hiring process or if [we’re] viewed as a minority on the team level? I want that answered.”

Chung, a first-round pick by the Patriots in 1992, coached for the Eagles in two stints, first from 2010-12 and again from 2016-19. He served as assistant offensive line/tight ends coach in 2018 when the Eagles won Super Bowl LII.

Chung wouldn’t say when asked to identify who made the alleged comments. He also referenced that person as a “good friend” whom he’s spoken to multiple times since revealing their conversation. Chung said his top priority remains fixing the issue and addressing whether Asians are considered minority candidates when it comes to the NFL’s hiring practices. He also aspires to coach in the NFL again.

“I want nothing but the best for everybody,” Chung said. “I don’t want anyone to experience that or go through this, to hear those words or comments or any type of discrimination. I just want to make sure everybody has a fair shot. Asians, African Americans, women, anybody — to have an opportunity to coach in this league.

“If a simple conversation [with Goodell] could fix that, then that’d be great.”

After revealing his claim, Chung said he’s received an outpouring of support from mentors and colleagues, including former Eagles and current Chiefs coach Andy Reid.

“Andy told me, ‘You’re doing the right thing. You’re holding the torch for everybody else,’ ” Chung said. “He’s been very supportive and helpful throughout this whole deal.

“The only thing I request from this is to just have a sit-down with Mr. Goodell to have this same conversation in a more in-depth setting. The word ‘minority’ is used so loosely. That’s what I want the most, professional to professional.”

Ramsey, star cornerback for the Rams, has utmost respect for ...Read More

LOS ANGELES — Edge rusher Joey Bosa did not practice Friday for the third day in a row, but the Chargers have not ruled him out for their game Sunday at Kansas City.

The three-time Pro Bowl player is dealing with what ...Read More

Will Fuller, the Dolphins’ biggest free-agent addition this offseason, completed a full week of practice with his new team ...Read More

Golladay might see his snaps reduced Sunday against the ...Read More

CHARLOTTE, N.C. — The Carolina Panthers will be without star running back Christian McCaffrey for “a few weeks,” a league source confirmed Friday.

McCaffrey had an MRI done a day after he strained his hamstring in ...Read More

TAMPA, Fla. — There’s a reason the Bucs used their first-round pick on an outside pass rusher.

Jason Pierre-Paul, who led the Bucs with 9 1/2 sacks last season, will miss Sunday’s game against the Rams. Pierre-Paul,...Read More