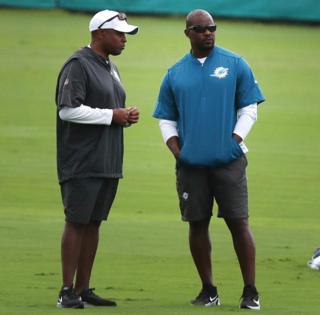 That begins on Tuesday as Dolphins players begin to report for camp in their new state-of-the-art training facility adjacent to Hard Rock Stadium ahead of what is arguably the franchise’s most exciting and consequential camp in nearly two decades.

With the team’s first practice slated for Wednesday, what’s also special about this training camp is that fans are eventually being welcomed back to witness it after being kept away from Dolphins facilities amid the peak of the COVID-19 pandemic last year. Fourteen of Miami’s training camp practices will be open to the public, beginning with Saturday morning’s drills.

As players compete for roster spots and starting roles, the tone for the season will begin to shape itself over the six weeks to come.

After going 10-6 in 2020 but coming up a win shy of the playoffs, the honeymoon period of the rebuild under coach Brian Flores and general manager Chris Grier is now over. Pressure will begin mounting from Dolphins fans for this regime to deliver a playoff appearance for the first time in five seasons and eventually get to consistently competing for deep runs — not the one-and-done postseason pushes the 2016 and 2008 teams made just to revert back to mediocrity shortly thereafter.

Nowhere is the fate of Grier and Flores tied more than with the success of second-year quarterback Tua Tagovailoa. Now under co-offensive coordinators George Godsey and Eric Studesville, it will be a crucial camp for the former Alabama star to develop into a prolific NFL signal caller after he went 6-3 in his rookie campaign but was pulled late in two games. Tagovailoa has now been gifted the playmakers on the outside to throw to and can possibly find more time in the pocket behind a developing offensive line.

It will be important to see what star cornerback Xavien Howard does. In the midst of a contract dispute with the Dolphins since fellow cornerback Byron Jones is slated to make $16 million more than him between last year and this year, he didn’t report to organized team activities or minicamp this offseason. Now, the money lost starts to get significant if he decides not to report as he would be subject to $50,000 fines for each day of a holdout.

Having Howard in the building and happy would be a big boost toward the Dolphins potentially replicating last year’s success forcing turnovers, but there’s multiple dimensions to the ordeal. Flores called it a “unique situation” when Howard skipped mandatory minicamp.

“It’s a renegotiation of an extension after one year, and it’s honestly something that hasn’t been done before,” said Flores. “I’m not saying that we’re drawing a line in the sand, but different players set the market every year. … We love him. He’s very productive. He’s a team player. He’s an important player on this team; but again, [it’s a] unique situation. We want to keep him here.”

Also pivotal for the defense will be the development of consistent pass rushers and run stoppers in the front seven after Miami lost edge defenders Kyle Van Noy and Shaq Lawson in the offseason but used a first-round pick on Jaelan Phillips out of the University of Miami in the draft.

Offensively, beyond Tagovailoa, his receivers and protection from the line, it would be nice to see the Dolphins grow a consistent running game. In lieu of a big offseason splash, the team will count on returning rushing leader Myles Gaskin, backup Salvon Ahmed and free-agent pickup Malcolm Brown.

One rookie from the 2021 draft class remains unsigned as of Monday afternoon. The Dolphins reached a deal with tight end Hunter Long, a third-round pick, on Monday and recently reached an agreement with second-round safety Jevon Holland on Friday, but second-round offensive lineman Liam Eichenberg is still not signed ahead of player report date.