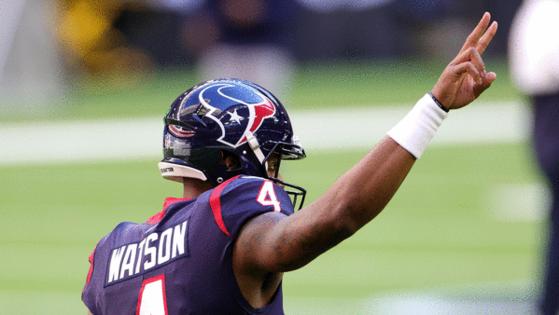 Neither Deshaun Watson nor the Houston Texans has much leverage in a trade now, but they’re seemingly counting on Watson’s talent to tilt the scales.

The Texans made it known through NFL Network on Monday that they are willing to trade Watson and have been listening to offers for some time. And their asking price in return is exorbitant, per ESPN: a combination of five high draft picks and starting caliber players. Any package must include three first rounders, the league’s network said.

Watson, however, is facing 22 separate lawsuits alleging sexual assault and misconduct during massage sessions. So the Texans can posture publicly all they want.

The reality is Houston erred by not granting Watson’s trade demands early this year before the explosive lawsuits tarnished his previously clean reputation. And Watson, despite holding a no-trade clause to dictate his destination, allegedly ruined several women’s lives with his alleged behavior — thereby losing his own leverage, as well.

The Houston Chronicle also reported on Sunday that while Watson doesn’t want to be in Houston and the Texans don’t want him there, “a trade doesn’t appear imminent” and “any move would likely come when his legal issues are resolved.”

Watson is reluctant to agree to a non-disclosure agreement in any settlement of the lawsuits against him, per NFL Network, which is helping to hold up the resolution of the cases. The reason is because Watson wants to be able to tell his side of the stories, the network said.

Maybe a team like the Philadelphia Eagles, Miami Dolphins or Denver Broncos still will step up, but the reality is the Carolina Panthers had serious interest already and bowed out over the information and uncertainty connected to Watson’s case.

The NFL Network suggested that a team still might get “comfortable” enough with Watson’s alleged transgressions to make a trade.

“Interested teams have done homework on Deshaun Watson’s legal situation,” tweeted NFL Network reporter Tom Pelissero, who broke Monday’s news. “The NFL hasn’t placed him on the exempt list and the civil cases won’t go to trial this year. If a team gets comfortable with that piece, it’s a rare opportunity to acquire one of the NFL’s best young QBs.”

The dialogue surrounding Watson grew uncomfortably normal on Monday, frankly, seemingly ignoring the elephant in the room. The reality is that it would be an enormous risk for any team to trade for Watson at any price right now, let alone for the cost the Texans are pushing.

Undoubtedly the Texans will have to come down off their reported asking price to make a deal go through. But it’s understandable why they’re start with a hypothetical ask of three first-round picks and two starters if they’re aware they’ll have to accept only two firsts and one player back instead, given Watson’s baggage.

Watson reported to training camp on Sunday to avoid paying $50,000 in daily fines, but reiterated his desire to be dealt. And his presence alone created an uncomfortable situation for Houston.

So now the Texans want teams to know: he’s yours. Come and get him.

So far, though, there’s no guarantee any team will.

KANSAS CITY, Mo. — They spend a lot of time here talking about the noise. Arrowhead Stadium is the loudest place in the NFL, and whether you believe it or not, you can buy a T-shirt that says so.

PITTSBURGH — The autumn equinox was a few days prior, but Sunday might have shown us an eclipse at Heinz Field.

As the seconds wound down Sunday afternoon at FirstEnergy Stadium, Chicago Bears quarterback Justin Fields had been sacked more times than he had completed a pass.

Did we just see the blueprint to beat the Chiefs?

The Chiefs lost to the Ravens 36-35 here on Sunday night, and like most football games the ...Read More

FOXBOROUGH, Mass. - It was a good thing the Patriots decided to honor Julian Edelman at halftime on Sunday. At least it gave fans inside Gillette Stadium something to cheer about.

Other than honoring the recently retired ...Read More