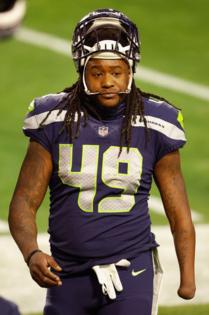 The Miami Dolphins’ pursuit to add another pass rusher ahead of training camp has brought them to Shaquem Griffin.

Griffin, the free-agent outside linebacker who spent the past three seasons with the Seattle Seahawks, signed with Miami on Friday afternoon, the Dolphins announced. It’s reportedly a one-year deal.

Griffin has been an inspirational story in NFL circles for the way he reached professional football after having his left hand amputated when he was 4 years old. He went on to have a standout college career at Central Florida as a key defensive player on the Knights’ 2017 undefeated team.

The Seahawks took the 26-year-old St. Petersburg, Fla., native in the fifth round of the 2018 NFL draft. Contributing largely on special teams in Seattle, he has 25 tackles over the past three seasons. Griffin recorded his first career sack against the New York Jets last December.

With the Seahawks, Griffin played with twin brother and cornerback Shaquill Griffin, who has since signed with the Jacksonville Jaguars. The two also played together at UCF.

The Dolphins could use more pass-rushing competition on the roster in training camp, which begins Tuesday. Earlier in the summer, they brought in longtime Charger Melvin Ingram for a workout, but he signed with the Pittsburgh Steelers this week.

Miami lost two of its top sack leaders from the 2020 season in Kyle Van Noy and Shaq Lawson in the offseason. The Dolphins have since drafted Jaelan Phillips in the first round after his breakthrough season with the Miami Hurricanes. Phillips could play outside linebacker opposite of defensive end Emmanuel Ogbah, who led the team with nine sacks last season. Miami also has Andrew Van Ginkel and Vince Biegel as top candidates to start at the other outside linebacker spot.

After two games, this much we know: The Lions' talent-starved defense will make a lot of opposing quarterbacks look great, and not just the ones named Aaron Rodgers. Or Jimmy Garoppolo. Or Lamar Jackson, who must be ...Read More

TAMPA, Fla. — For much of his career, Rob Gronkowski has come off as the classmate you love to envy, the mischievous member of the cool clique who aces every chemistry exam without ever cracking a textbook.

During a ...Read More

A fire broke out Tuesday on the roof of the Caesars Superdome in New Orleans, injuring one person.

Flames and black smoke were visible on top of the massive football stadium around 12:30 p.m. The source of the fire ...Read More

This isn’t time to panic.

The Buffalo Bills have been beating down the Miami Dolphins for most of the past decade, so why does last Sunday’s 35-0 embarrassing loss suddenly rattle the cage?