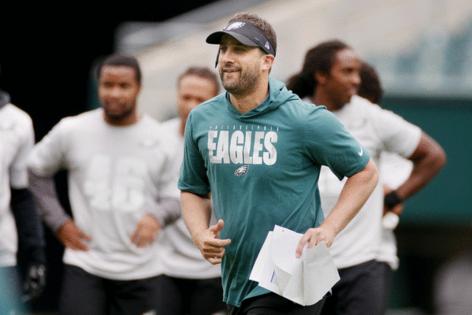 A longtime assistant football coach who’d never called plays and never played in the NFL got the top job in Philadelphia. The veteran players he inherited were skeptical that this new guy, just 40 years old when he was hired, would be able to command a locker room peopled by such strong personalities as Troy Vincent, Brian Dawkins, Hugh Douglas, and Steve Everitt. Fourteen seasons later, Andy Reid had engineered the Eagles’ golden age, with nine trips to the playoffs and a Super Bowl appearance.

Now, Nick Sirianni, 40, reportedly has a few players who are skeptical that he can command a locker room peopled by such strong personalities as Fletcher Cox, Brandon Brooks, Jason Kelce, and Lane Johnson. NFL Network analyst Michael Robinson, a former Pro Bowl fullback and a Super Bowl champion, said Monday night that “I know some guys in that locker room who they question this guy, and they question if he can truly lead this team.”

After a day of checking, we can confirm Robinson’s claim; there is, in fact, at least one player who is skeptical that Sirianni — who has never called plays, and who never played in the league — can handle an NFL locker room. He says other players are, too.

Is this a big deal? No. Rather, it’s completely predictable. In fact, you should be much more concerned if veteran players were not skeptical.

Players’ careers last, on average, about three seasons in the NFL. Every season is precious. None can be wasted. You can’t blame a player for worrying that Barney Fife is going to waste one of his years.

Robinson said he wouldn’t “name names,” which led Lane Johnson to tweet that it didn’t come from him.

Of course, the last time unnamed sources made noise about discontent in the Eagles’ locker room it concerned Carson Wentz’s inability to lead the team, which turned out to be completely accurate. Such issues are not poison pills; Wentz’s teams still won lots of games.

Players won’t say it, obviously, but if the truth were known, most of them are skeptical that first-time head coaches in any sport can command a large roster composed of the sort of egoistic multimillionaires you need to win in professional sports, and especially in the NFL. It’s the risk you take when you hire a newbie.

The same concerns existed not only when the Eagles hired Reid in 1999, but also when they hired Ray Rhodes in 1995. He’d never been a head coach and he’d only been a coordinator for three seasons when Eagles owner Jeffrey Lurie signed him to replace Rich Kotite. No one really knew what to expect when Rhodes came aboard. Rhodes hired Jon Gruden as his offensive coordinator, leaned on Ricky Watters, and was the NFL Coach of the Year in 1995.

Of course, Rhodes and Reid had better bona fides than Sirianni. Rhodes had played in the league, helped build the Packers of the 1990s, and won big with the 49ers. Reid won big with the Packers. Sirianni hasn’t won anything anywhere and is largely seen as Frank Reich’s creation — but then, Doug Pederson was supposed to be Andy Reid’s creation, too. Despite Pederson’s experience as a player and seven years as an assistant, his arrival was not met with great enthusiasm, but most of that skepticism came from outside of NovaCare Complex.

Pederson got the job in 2016, and after his first season former Eagles general manager (and then-Ringer podcaster) Mike Lombardi famously said that Pederson “might be less qualified to coach a team than anyone I’ve ever seen. ... When will the Eagles admit their mistake?”

When Sirianni got the job in January over more decorated candidates, Lombardi, a regular contributor to Boston radio station WEEI, compared Sirianni to Patriots offensive coordinator Josh McDaniels: “I think it’s the Eagles’ mistake. ... I think this is going to be a hard event.”

The last time Lombardi said the Eagles made a hiring mistake, they won a Super Bowl five months later.

Super Bowl LVI will be held in the Rams’ new stadium in February.