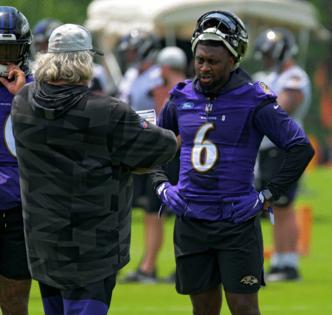 BALTIMORE — Like all NFL rookies last season, Patrick Queen’s play was affected by the lack of offseason camps and preseason games. So it will be interesting to find out if he develops into the complete linebacker the Ravens need in the middle of their defense.

Queen, the team’s first-round pick and No. 28 overall selection out of LSU in 2020, led the Ravens in tackles last season with 106, and he was a contender for NFL Defensive Rookie of the Year. But there were times when he was exploited in one-on-one pass coverage or wasn’t physical enough to shed blockers in run defense.

“It’s insane. Last year, I didn’t go into the season in shape at all,” Queen said. “I came in like 240-something [pounds], couldn’t catch my breath when we were running. It’s just so hard when you’re not doing any football activity outside of working out, so that last offseason was terrible. I came into the season, and I was like, ‘Bro, this is going to be a long season for me to get in shape.’ So, it took me like five games to get in shape, finally.

“And just coming into OTAs this year, you get to practice, you get to train, you get to do whatever you want. You could do stuff on your own. So, you’ve got the resources now to actually get in shape and do what you need to do to be prepared for when we come back to training camp and try to get in football shape. So, it’s way better now coming into OTAs.”

The bit about coming into training camp out of shape is a little alarming. Now, if it’s a veteran like Calais Campbell or a big-bodied nose tackle such as Brandon Williams, there is less of a concern. But how does a first-round pick in a new city who hasn’t played a down in the NFL come in breathing heavy?

That’s why there are questions about whether Queen can take the next steps.

There was plenty to like about him last season. Forty of his 106 tackles were assisted, which means he pursued well. Queen had one interception, two forced fumbles and two fumble recoveries, including a 53-yard return for a touchdown. He might have been a better pass rusher than some expected, finishing with three sacks. Speed was a big part of his game, being able to run sideline to sideline.

But Queen also had two liabilities. One was his inability to cover tight ends and running backs in the flats or on crossing routes. There were times when he was beaten physically and others when he was totally lost in space. And it just wasn’t Queen. Second-year weakside linebacker Malik Harrison struggled as well.

“You see it in the passing game, the pass skeletons [and] the half-line-type things that we do that are teaching periods [and] repetition periods,” Ravens coach John Harbaugh said of the current OTA practices, which weren’t allowed last year amid the COVID-19 pandemic. “Those are immensely valuable, especially at a position like inside backer where you’re in the middle of everything and things are always moving fast around you, and you have to make split-second type of reaction-type decisions. So, it’s been great for him. It’s been great for Malik, all of our guys.”