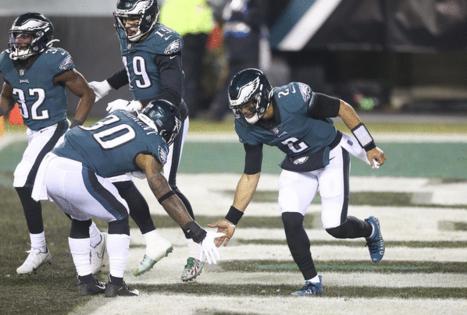 PHILADELPHIA — Twelve wins. How can this be? The Eagles have a new coaching staff. Their best players are 30-somethings returning from injuries. They lack even one proven receiver. Quarterback? TBA. And ... Twelve wins? Really?

Our four-man squad of Eagles writers does not share my view. Three say the Eagles will go 7-10; one, whom we’ll call Mr. Sunshine, has them at 8-9, even though he says they’ll get swept by the Giants and won’t beat the lowly Lions.

Some might call 12-5 foolish. Irresponsible. A transparent attempt at pandering to a franchise whose every move I’ve criticized for months on end.

Not true. (Well, not completely true). The Eagles play the easiest schedule in the NFL. They reside in the worst division in NFL history. They should have the best offensive line in the NFL. With a little health, a little luck, and a little quarterbacking, they could, feasibly, snake 12 wins and take the NFC East title.

This assumes that Jalen Hurts and/or Joe Flacco don’t play as historically poorly as Carson Wentz did in 2020. He was the biggest reason the Eagles finished 4-11-1 instead of 8-8. Even with all of the team’s injuries, and even with the poor coaching, if Wentz had been as good as, say, Gardner Minshew, instead of as bad as, say, Sam Darnold, the Eagles would have been in the playoffs for a fourth straight year. They weren’t, as a whole, quite as bad as their record.