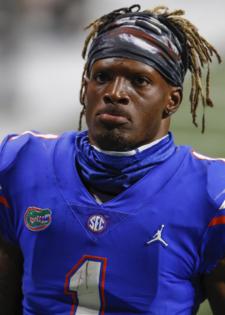 Toney, the Giants’ first-round pick, did some drills with a bare right foot on day one of rookie minicamp in East Rutherford, N.J., because he said his cleats were “the wrong size.”

Then he appeared to hurt his foot, requiring mid-practice attention from trainers and sitting out the team’s post-practice conditioning sprints alongside corner Rodarius Williams, whose calf acted up.

It was an unexpectedly eventful first NFL practice for Toney.

“I have to take the situation for what it is, you know what I’m saying?” Toney said. “Like if I was limited to anything, I just had to deal with that … Nerve-wise, I was eager to go out there and show the coaches what I can do. They came and took a chance on me. The least I can do is show them my ability and what I can actually bring to the organization.”

Early in practice, Toney appeared uncomfortable and took off his right cleat but continued doing drills with a bare right foot and a cleat on his left.

“I think it was just the wrong size,” Toney said.. “They’re figuring that out right now … I do whatever it takes, you know what I’m saying? I probably have [done that before], honest. I don’t remember. It’s just me. That’s the dog mentality.”

Toney put his shoes back on and ran a few routes. But then he walked off, took both shoes off and was tended to by trainers, while sitting on top of an equipment chest in between fields. GM Dave Gettleman and head athletic trainer Ronnie Barnes were paying close attention.

Giants coach Joe Judge couldn’t answer if Toney and Williams had hurt themselves or not when asked after practice. Judge said he still had to check with Barnes.

“You know what I have to check with Ronnie,” Judge said. “I looked over at the end and they were at the trainers, so it’s something Ronnie was talking to them about, so I’ll get the injury report when we’re done here and see where we go from there.”