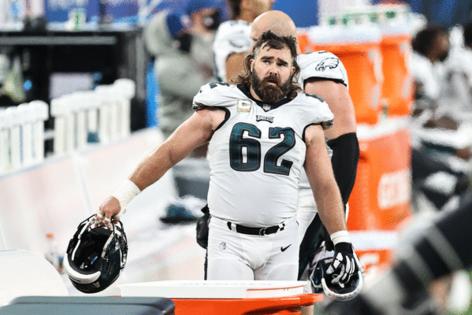 PHILADELPHIA — Jason Kelce still wants to play. Maybe forever, by the sound of it.

The annual Kelce Retirement Watch appears to be in peril. Since the middle of the 2019 season, Kelce, then 31, has teased his retirement, citing the brutal wear and tear that 17 weeks of the low-speed, high-impact collisions inherent to the job of playing center in the National Football League. On Thursday, he didn't sound likely to quit any time soon: He told WIP-FM (94.1) that he would miss the "camaraderie" of the locker room and the intensity of the NFL too much to walk away too early.

Now 33, Kelce sounds less like a player content to walk away with minimal physical impairments and neurologic worries than a player who will have to be dragged away from the game:

"I still love coming to work into an environment where everybody is trying to be the best they can be, and in an environment with the best people at what they do in the world. I don't know how I'm going to get that, and that's the biggest thing."

Fatherhood will do that to you.

Actually, Kelce did not cite 3 a.m. feedings and toddler-proofing his home as reasons why he wants to keep parking his Tesla at the NovaCare facility. He is a happy and doting father to 19-month-old Wyatt Elizabeth. But he's just as much a father figure for the Eagles.

Kelce's first retirement consideration came on the heels of other early retirement announcements, at the height of the concussion alarm, and in the middle of a season that, after the heady success of 2017 and the promise of 2018, was a dreary slog through mediocrity.

Now? Now, he's resigned himself to the inevitable addiction to unique teammates and unselfish teamwork, especially compared with the mundaneness of harried weekday carpools and banal weekend football analysis. It's a lot more fun to hang out with millionaire athletes and show-biz celebrities than with soccer moms and sportswriters.

"I'd miss the atmosphere of the locker room," Kelce said "Those personalities are hard to come by when you're done playing. At some point I'm going to have to say that it's over, but I'm not ready to do that yet. I'm getting goosebumps just talking right now."