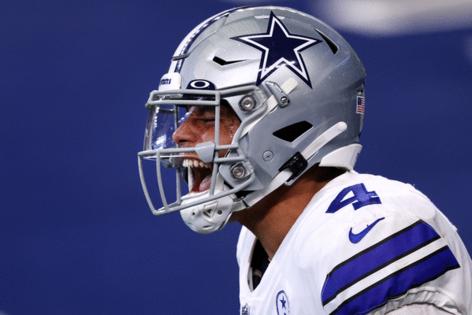 FORT WORTH, Texas — What started as a grand, although challenging beginning of the 2021 season, featuring the return of quarterback Dak Prescott and on the road against the defending Super Bowl champion Tampa Bay Buccaneers, might now feature some additional motivation for the Dallas Cowboys.

Credit seven-time Super Bowl champion quarterback Tom Brady for adding a little spice to the much-anticipated game, which kicks off the NFL season in prime time on Thursday, Sept. 9, on NBC, and some sizzle to the NFL’s official 2021 schedule announcement on Wednesday.

Brady used his Instagram story to express his excitement about the season and take a troll shot at the Cowboys’ America’s Team moniker.

“9/9 CAN’T COME SOON ENOUGH. EXCITED TO OPEN AGAINST ‘AMERICA’S TEAM’,” he wrote in a caption with a disingenuous winking photo from WandaVision next to it.

The popular and viral meme has come to mean whatever is being said is a lie or a joke.

The Buccaneers will be raising their Super Bowl banner before the game. It’s an opportunity for the Cowboys to make a statement in an attempt to reclaim their past glory in a season that fans and the organization hopes ends with their first championship since 1995.

The Cowboys, however, still hold on to the America’s Team moniker forged in the 1970s because they remain one of the league’s top television draws and most popular teams.

Despite finishing 6-10 last season, the schedule has the Cowboys playing in five prime-time games, starting with the opener against the Buccaneers.