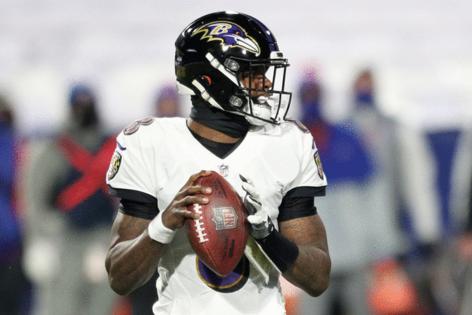 BALTIMORE — Lamar Jackson was not a particularly effective outside-the-numbers passer in 2019, when he was the NFL’s best quarterback and the Ravens won 14 games. Last season, Jackson’s second as a full-time starter, his range was even more limited. And still sometimes it did not matter.

In a Week 9 game against the Colts, Jackson threw 23 passes, just five of which were outside the numbers. J.K. Dobbins and Gus Edwards offered little run-game relief, combining for 53 yards on 23 carries. Hemmed in and bottled up, there was only so much the Ravens could do on offense — but what they did was enough. Jackson finished 19 for 23 for 170 yards, the defense forced two turnovers and returned a fumble for a touchdown, and the Ravens left Indianapolis with a gutsy 24-10 win.

Still, it was as if their field had shrunk on offense. At his end-of-season news conference in January, general manager Eric DeCosta said the Ravens “don’t want to be a team that’s forced to do anything.” In their passing game, limitations had become apparent. A throw over the middle was typically a good throw. Move the target to the sideline, however, and the results would suffer. The Ravens couldn’t put the ball where they wanted to, and defenses adjusted.

There is never a simple solution for such a complex problem. As a passer, Jackson can do more; he can also do only so much. He needs help — help that, over the past two months, the Ravens have tried to provide. In March, they signed wide receiver Sammy Watkins, a productive if injury-prone outside receiver. Then, in late April, they drafted Rashod Bateman and Tylan Wallace, whom the Ravens’ analytics department, DeCosta said, had identified as two of the top-10 outside receivers in the class. Now the team expects dividends from its considerable investments.

“When you add talent like that, it’s really, I think, going to kind of expand our profile quite a bit, actually, to play with the kind of balance that we really want to play with,” offensive coordinator Greg Roman said after Bateman was taken No. 27 overall. “I really think it will probably take some pressure off some of the guys that have been here, like Marquise [’Hollywood’ Brown], and free him up a bit as well. The field is about 53 yards wide, and I think people are going to have to defend all 53 yards of it.”

Defenses didn’t have to worry much last season. The threat of a sideline shot from Jackson wasn’t unlike that of an Anthony Davis 3-pointer — sure, it might work out, but there were far more concerning options in play.

Maybe most troubling for the Ravens was Jackson’s drop-off from his Most Valuable Player-caliber 2019. According to Sports Info Solutions, on throws outside the numbers, his accuracy dipped from 64.7% to 59.7%, his interception rate more than doubled (to 3%), and his passer rating fell from 101.7 to 85.3. (The San Francisco 49ers’ Nick Mullens, by comparison, finished 27th in overall passer rating last season, at 84.1.)

Jackson, since his arrival in Baltimore, has always been more comfortable targeting the middle. As a rookie, his between-the-numbers passing was more efficient than incumbent Joe Flacco’s. In 2019, he finished behind only the Tennessee Titans’ Ryan Tannehill in passer rating there. Even last season, a year of ups and downs, he completed over 70% of his passes and passed for 18 touchdowns and five interceptions on middle-field attempts. His season-changing red-zone interception in the playoff loss to the Buffalo Bills was a grim exception to the rule.

Part of Jackson’s disappointing 2020 could be explained by the offensive line’s regression: According to Pro Football Focus, the Ravens ranked first in pressure rate allowed in 2019 (21.7%); with guard Marshal Yanda retired and left tackle Ronnie Stanley missing over half of last season, they finished 25th (34.8%).

But that accounts for only so much of Jackson’s troubles with his outside passing. On drop-backs without pressure, among qualifying quarterbacks, only Dwayne Haskins Jr. had a lower passer rating than Jackson (78.1) last season on throws outside the numbers, according to SIS. Jackson finished with four touchdowns, four interceptions and a 64.8% completion rate.

For the past two years, he has been among the NFL’s least efficient quarterbacks on those no-pressure, out-wide throws. Among 30 potential 2021 starters, Jackson ranks 26th in Expected Points Added per drop-back, which measures the value of a play by accounting for its down, distance and yards to goal. According to SIS, the only qualifying quarterbacks worse than him were not esteemed company: Andy Dalton, Drew Lock, Sam Darnold and Tua Tagovailoa.

It was not just a Jackson problem. According to a review of last season’s receptions, Ravens wide receivers combined for no more than four or five contested catches on outside throws. But Jackson’s reluctance to throw to the sideline — more than 63% of his passes were over the middle, well above average, according to SIS — and his inaccuracy when doing so — Jackson had one one of the NFL’s lowest rates of throws “on target” — had a limiting effect on the rest of the offense.

Defenses, for one, were mostly untroubled by isolated Ravens receivers. Why worry about shading a safety over to, say, Miles Boykin’s side when he’d be more helpful bracketing tight end Mark Andrews in coverage? Or gumming up the Ravens’ ground attack? Or spying Jackson? PFF found that the Ravens threw 77 times in formations with an isolated receiver last season. Only Brown was ever targeted on a “true isolation route” — and that happened just three times.

The Ravens had to get better, so they got help. Watkins was not especially efficient outside the numbers over his past three seasons in Kansas City, but in 14 games in 2019, he had 232 yards and two touchdowns, according to SIS, third most on the Chiefs. In 2015, Watkins’ first season with then-Bills offensive coordinator Roman, he had 958 yards and a 151.1 passer rating when targeted outside the numbers.

In the draft, the Ravens added two insurance policies. Bateman profiles as a scheme-versatile target, but he was at his best for Minnesota in split-wide alignments, where he led all Football Bowl Subdivision receivers in yards per route run in 2019, according to PFF.

Bateman also finished in the top 20 nationally in contested-catch rate that season, and Wallace, the Ravens’ fourth-round pick and a productive outside receiver at Oklahoma State, has the NCAA’s most contested catches since 2018. Together, the two could bring out a side of Jackson he has seldom embraced.

On outside routes that often lead to jump-ball throws — fades, go routes, double moves, back-shoulder throws — Jackson has been remarkably gun-shy. He threw seven of them in 2019 and seven in 2020, the fewest among the NFL’s regular starters. (He completed one and none, respectively, according to SIS.) The Pittsburgh Steelers’ Ben Roethlisberger, meanwhile, attempted 48 last season, completing 18. The Tampa Bay Buccaneers’ Tom Brady went 15 for 38.

2021 could mark a turning point. In revamping their receiver room this offseason, the Ravens added “a lot of competition” to the position, Harbaugh said. He was hopeful that they’d push one another, that by working together, they’d improve together. But their evolution will depend, in part, on Jackson, just as his evolution will depend, in part, on them.

“There are definitely some things that we’re doing right now to evolve, and there are definitely some things people are going to see from us that they haven’t seen before,” Roman said. “Our staff is working really hard and diligently on that for this upcoming season. When you really look at who you have to beat in the AFC these days, you’ve got to have talent everywhere. There are some really good teams out there, and I really feel great about what we’re building here.”

TAMPA, Fla. ― The calendar is circled on Oct. 3. Not just because that’s the date Tom Brady will return to Gillette Stadium to play the New England Patriots. It also just happens to be Bruce Arians’ 69th birthday.

CHICAGO — Gone are the days of the Chicago Bears talking about the potential of a breakthrough for Anthony Miller.

The wide receiver showed promise in his rookie season of 2018 after the team traded up in Round 2 to ...Read More

SAN DIEGO — The National Football League has quit tiptoeing through its two lips on the COVID-19 issue and put ...Read More

TAMPA, Fla. — Tom Brady gave a rousing speech at the Bucs’ ring ceremony Thursday night that will be remembered for years to come.

Not only did he thank the Glazer family that owns the Bucs and his coaches, he ...Read More

PITTSBURGH — I can't believe what I am hearing about the Steelers.

Porky Pig is going to be their quarterback this season?

That seemed to be the conclusion on Twitter after the team posted a picture of Ben ...Read More

This is not exactly a column about Ted Ginn Jr. retiring. He did so recently after 14 NFL seasons, showing the rare speed and relentless work ethic that made then-Dolphins general manager Randy Mueller draft him in 2007.