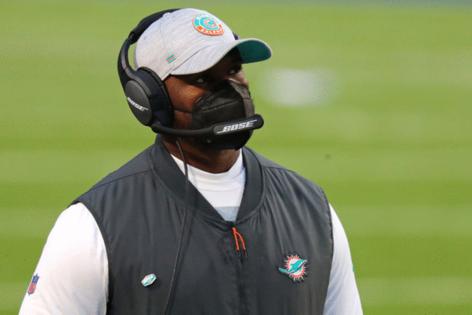 Imagine this is one of those HGTV reveals, showing off the finished renovation of the Miami Dolphins’ rebuild under general manager Chris Grier and coach Brian Flores.

The blindfolds are finally taken off and the first thing you see are two speedy receivers (Jaylen Waddle and Will Fuller) clearing out the safeties for DeVante Parker, Preston Williams, Mike Gesicki, Myles Gaskin and Lynn Bowden Jr. to work underneath.

You see a young offensive line, which features four first- or second-year players in the starting unit, and a defensive line that is anchored by four defensive linemen in their first, second or NFL third season.

So this is it?

That’s the question I found myself asking after reading Peter King’s latest piece, which focused on the Dolphins and their 2021 draft.

In the column, Flores insinuated that the rebuilding phase is over, completed during the same time period as the franchise’s new facility, which is finishing up in Miami Gardens this summer.

After three drafts, three free agency cycles and three years of continuous changes made to the coaching staff and roster, the Dolphins are finally done building the foundation?

Actually, I don’t. So explain.

Make it crystal clear for this journalist who is covering his sixth regime change in Miami, and is on his fifth head coach since 2007.