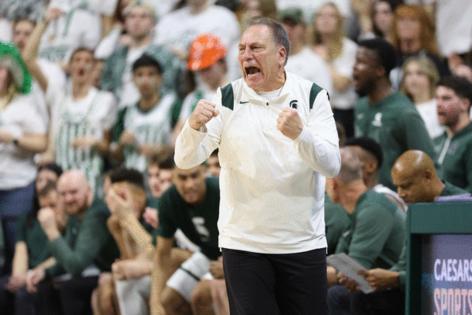 DETROIT — This is the time of year when questions turn to quadrants in college hoops.

And the quandary Michigan’s basketball team finds itself in right now is quite simple, really: The Wolverines don’t have much to show for the work they’ve done thus far, at least in the eyes of the NCAA Tournament selection committee.

Meanwhile, for Michigan State, there’s more quality in the accomplishments to date, but still plenty of uncertainty with six weeks left to play in the regular season, including concerns about injuries and doubts about depth.

But at least this year in a jumbled Big Ten race, they both know they’ve got company. Behind a clear front-runner in Purdue, which on Monday claimed the No. 1 spot in this week’s AP Top 25 rankings, there are 11 teams separated by a total of two games in the league standings. The KenPom ratings have more than half the league — eight teams in all — projected to finish 10-10 in conference play. And as Indiana’s Mike Woodson put it after Sunday’s win over the Spartans in Bloomington, "The Big Ten championship is still out there. Somebody's got to win it."

But if not Purdue, then who? And what does it say about the overall strength of the Big Ten this year that the Boilermakers are the only team in the conference currently ranked in the top 25? According to SportsRadar, that hasn’t happened since the 2003-04 season, when the league managed just three NCAA bids and only the Big Ten champ (Illinois) advanced past the Sweet 16.

We probably won’t know the full answer to either of those questions until March, when this year’s seeds get planted and the single-elimination tournaments begin to take care of any lingering doubts.

For now, though, there’s little time for coaches to worry about any of that. And not a lot of patience, either.

For example, don’t get Izzo started about a league schedule that has been compressed by TV demands and an odd calendar year. Monday was a rare off-day for his Spartans, after a brutal stretch that included six conference games in 16 days, with three of them on the road.

“I don’t know what happened with this (schedule) but I don’t really care,” Izzo grumbled last week. “It doesn’t matter anymore.”

Rob Pelinka sat with Rui Hachimura to his left before Tuesday's game, the Lakers' future the topic of conversation as the general manager introduced his newest acquisition.

AMES, Iowa — One of the most entertaining, back-and-forth basketball games of the early Big 12 season ended in frustrating fashion for Kansas State.

Iowa State came through with enough clutch plays in the final moments...Read More

The Wildcats walked into Memorial Gym as 5.5-point favorites over Vanderbilt, and they headed home to ...Read More