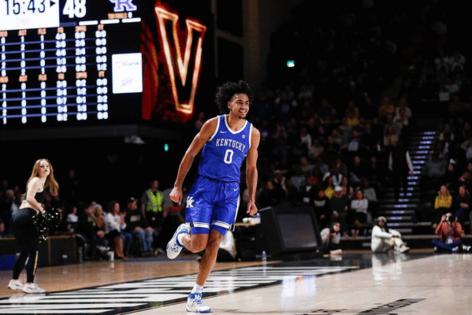 The Wildcats walked into Memorial Gym as 5.5-point favorites over Vanderbilt, and they headed home to Lexington as 16-point winners — beating the Commodores, 69-53, for their fourth consecutive victory.

UK has enjoyed a modest winning streak since the low point of the 2022-23 season — that shocking loss to South Carolina in Rupp Arena — but even the three previous victories had plenty of tense moments.

The Cats were down 8-0 early at No. 5 Tennessee, their season seemingly about to go up in smoke. They pulled the upset there. Returning home to Rupp, the Wildcats trailed both Georgia and Texas A&M at halftime before turning things around after the break for eventual wins.

No such scares Tuesday night.

Jacob Toppin scored on UK’s first possession, the Cats never trailed by more than four points — even that was early, and lasted only seven seconds before Antonio Reeves cut it to one with a three-pointer — and Kentucky went into halftime up 36-27.

Then, the Cats put Vanderbilt away in the opening minutes of the second half. By the time coach Jerry Stackhouse called a timeout with 15:43 left in the game, his Commodores were down 18 points and the crowd in Nashville — the majority of them wearing Kentucky colors — chanted “Go Big Blue!” while the Vanderbilt cheerleaders were on the court.

It was also a total team effort from Kentucky. At that point in the game, the Cats led 48-30 and five different UK players had scored between eight and 10 points.

UK point guard Sahvir Wheeler came off the bench for the third consecutive game, but — unlike the last two — he got ample playing time in the second half. Wheeler finished with four points and five assists.

Vanderbilt was playing without star 7-footer Liam Robbins — the team’s leading scorer and rebounder, and No. 2 in the Southeastern Conference in blocked shots — as well as backup big man Lee Dort, who are both out with injuries expected to keep them sidelined a few weeks.

Still, the Cats didn’t exactly pound the paint to Tshiebwe, and the Kentucky star didn’t force the issue inside, often kicking out to create scoring opportunities on the perimeter.

Vanderbilt (10-10, 3-4 SEC) is no world-beater — No. 84 in the NCAA’s NET ratings coming into this game — but the Commodores do have recent wins over Arkansas, South Carolina and at Georgia, and this was as convincing a victory that Kentucky has had since its win over lowly Louisville nearly four weeks ago.

UK (14-6, 5-3 SEC) now takes a brief break from conference play to host No. 9 Kansas in Rupp Arena on Saturday night. The Jayhawks will come to Lexington on a three-game losing streak — all of those losses were against top-20 teams — and KU has never dropped four in a row in Bill Self’s 20-year tenure as head coach. This will be the final installment of the SEC/Big 12 Challenge, and the tipoff is set for 8 p.m. on ESPN.