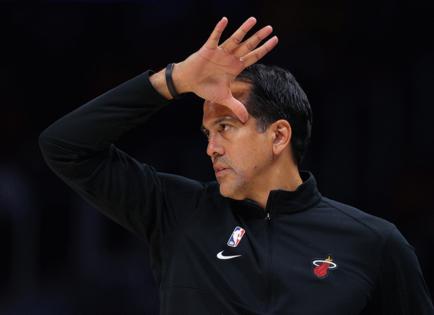 Which, at this stage of the season, is what the Miami Heat need most.

And so, with Jaylen Brown, Marcus Smart and Al Horford out for the Boston Celtics, the Heat did what was required Tuesday night at Miami-Dade Arena, pushing to a 98-95 victory and again moving a season-best five games above .500.

With Jimmy Butler unable to go due to a knee issue, the Heat rode Adebayo, who finished with 30 points and 15 rebounds, supported by 15 points from Haywood Highsmith, 13 from Max Strus and 12 from Victor Oladipo, on a night the Heat got 4-of-19 shooting from Tyler Herro and 1-of-7 shooting from Kyle Lowry.

The Celtics went up 14 in the third period before the Heat closed within 82-75 entering the fourth.

The Heat then went down 10 midway through the fourth quarter, before tying it 87-87 on an Adebayo dunk with 5:44 remaining.

HARTFORD, Conn. — Breanna Stewart’s impending free-agency decision is quite possibly the biggest storyline in the WNBA this offseason, but the UConn women’s basketball legend is looking to draw attention to another ...Read More

NEW YORK — An MCL sprain feels like a scar. It feels like you got cut. It’s an immediate sharp pain followed by an extended dull pain. And when the pain goes away after a few days, so does the range of motion. So does ...Read More

We’re well past the halfway point of the regular season, and the Warriors can’t figure out what kind of team they are.

When he was asked about his concern level for the Warriors last week, Golden State wing Klay ...Read More