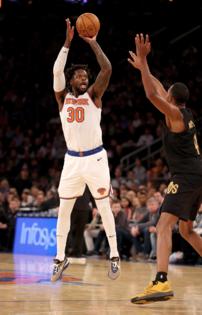 Behind a 36-point, 13-rebound effort from Randle, the Knicks avoided a fourth-quarter collapse Tuesday and toppled the Cavaliers, 105-103, snapping their four-game losing streak.

Randle was one of the late-game heroes with a go-ahead 3-pointer with two minutes remaining, and Isaiah Hartenstein stopped a game-tying bucket by contesting Mitchell at the rim in the final seconds.

Mitchell, the All-Star who the Knicks failed to acquire in the summer, finished with 24 points in 38 minutes on 9 of 24 shooting.

The Knicks (26-23) shot 17 from 33 from beyond the arc. They won their first game since center Mitchell Robinson suffered a broken thumb.

The dramatic ending Tuesday occurred because the Knicks squandered an 11-point advantage in the fourth quarter. Then with a chance to put the game away, RJ Barrett air-balled a wide-open trey with 15 seconds left.

That set up Cleveland’s final possession with a two-point deficit. Mitchell drove into the paint and was met at the rim by Hartenstein, who did enough without fouling to maintain the lead. Mitchell grabbed his own rebound and threw it out to Evan Mobley, who missed a turnaround at the buzzer.

Mitchell appeared to injure his leg on the play and limped off the court.

Immanuel Quickley returned to the rotation after missing Sunday’s loss in Toronto with a sore knee. He logged 27 minutes with nine points..

Evan Fournier, meanwhile, was unavailable for personal reasons – the birth of his son. He wouldn’t have played anyway with Quickley healthy.

HARTFORD, Conn. — Breanna Stewart’s impending free-agency decision is quite possibly the biggest storyline in the WNBA this offseason, but the UConn women’s basketball legend is looking to draw attention to another ...Read More

NEW YORK — An MCL sprain feels like a scar. It feels like you got cut. It’s an immediate sharp pain followed by an extended dull pain. And when the pain goes away after a few days, so does the range of motion. So does ...Read More

We’re well past the halfway point of the regular season, and the Warriors can’t figure out what kind of team they are.

When he was asked about his concern level for the Warriors last week, Golden State wing Klay ...Read More