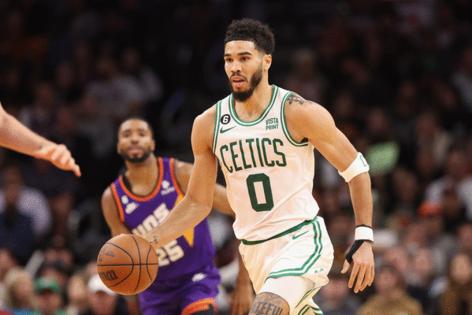 As the Celtics took a 45-point lead after Jaylen Brown drilled a 3-pointer, Monty Williams had seen enough. The Suns coach stood up from his seat, looked down at his bench and pointed to his reserves. He was waving the white flag and taking his starters out of the game.

There were still more than five minutes remaining in the third quarter.

The Celtics have had several impressive performances throughout their blistering start to the season, but nothing quite like this.

Wednesday night’s matchup with the West-leading Suns could have been viewed as a measuring stick for the Celtics, maybe even an NBA Finals preview. It promised to be a hard challenge. On the road, without Al Horford and still missing Rob Williams, as All-Star guard Chris Paul returned for the Suns. Instead, the Celtics produced their most dominating effort to date and issued yet another warning to the rest of the NBA with a jarring and borderline ridiculous 125-98 victory in Phoenix.

Brown and Jayson Tatum each scored 25 points, with the former for some reason starting the fourth quarter before Joe Mazzulla came to his senses. Truthfully, neither probably even needed to play the second half as the Celtics built a 27-point lead that extended to 36 within the first couple of minutes of the third quarter. They humiliated the Suns on their floor in a performance reminiscent of the Mavericks’ Game 7 victory last postseason in which they led by as many as 46.