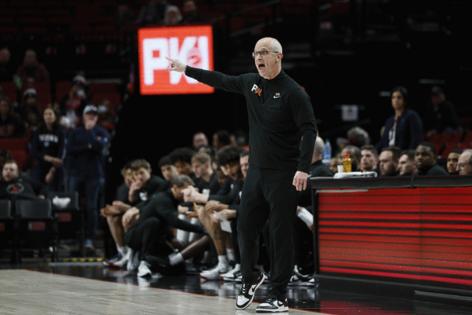 GAINESVILLE, Fla. — Among the series of dunks the fifth-ranked UConn men’s basketball team threw down while warming up before its game at Florida on Wednesday something stood out. There was Donovan Clingan, driving hard, cradling the ball in his right hand as his body performed a full rotation. A true freshman preparing for his first college road game not played at a neutral site, he stuffed it one-handed and jogged with pep and a youthful grin to the back of the opposite line.

Later, when the Huskies trotted onto the court to their first chorus of boos from an opposing student section this season, Clingan’s smile widened as he bobbed his head to T.I.’s song “Bring Em Out” that blared over the speakers in Exactech Arena.

He finished the game with five dunks and a career-high 16 points (8 of 9 from the floor) while grabbing eight rebounds, blocking three shots and grabbing a steal in helping the Huskies to a 75-54 win.

UConn is now 10-0 for the first time since the 2010-11 national championship season under Jim Calhoun.

When Clingan entered the game around the 12-minute mark in the opening half, giving rest to Adamo Sanogo who had scored six of UConn’s first nine points, the 7-foot-2 big man didn’t miss a beat. For a stretch, seemingly every possession resulted in a lob to the freshman who slammed a couple and laid in one more, scoring six consecutive points in an 11-1 Husky run.

After Jordan Hawkins was fouled on a 3-point attempt in the corner, which fired up Gators coach Todd Golden, and made all three of his free throws, Andre Jackson made his second 3-pointer of the game and found Clingan a few possessions later for an easy reverse layup that made the score 30-15.

Clingan dunked it once more before halftime, following a perfect pass from Hassan Diarra, and led the way into the break with 10 points on 5 of 6 shooting.

The Huskies took a 13-point lead into halftime after shooting 42.4% from the field and 30% from deep. Florida made eight of its collective 28 shots (28.6%) and struggled from the free throw line, making just 5 of 11.

Trading shots to start the second half, the Huskies needed help from their guards.

Hawkins, who made just one shot from the field in the first half and three free throws, made his first four shots (one 3-pointer) to open the second half. He scored seven straight for the Huskies midway through the second half to extend the lead to 15 points. He finished the game with 15 points on 5 of 12 shooting.

Sanogo battled Florida’s leading scorer Colin Castleton almost all game. Castleton, who has two inches on Sanogo standing 6-11, shot just 1-for-9 from the field in the first half and finished the game with 12 points (4-of-14) and eight rebounds. Meanwhile, Sanogo powered his way to a game-high 17 points (8-of-13) and added seven rebounds.

Joey Calcaterra scored 11 points for the Huskies and Jackson scored eight. As a team UConn shot 51.7% from the field, 36.8% from deep and 88.9% from the free throw line. The Huskies won the rebounding battle, 42-28, and held the Gators to 30% shooting.

UConn returns to Connecticut for its nonconference finale, a noon tip-off at Gampel Pavilion against Long Island on Saturday.