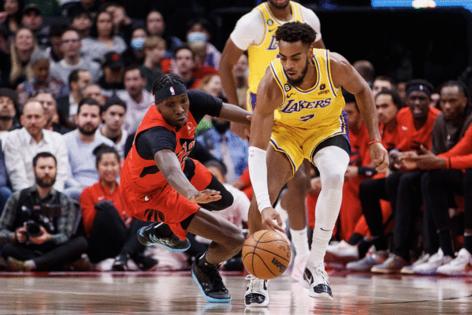 TORONTO — The risk you run when you commit to big-picture thinking is that you can get short-term nights like this, the Lakers a combination of sick, tired and old as they rolled into Toronto early Wednesday morning after losing in Cleveland Tuesday night.

Anthony Davis would stay in the back, receiving medicine and fluids as the Lakers try to get him ready for the final games on their current road trip. LeBron James and Patrick Beverley, the two oldest players on the team, got the night off to deal with lingering ankle and knee issues, respectively.

It meant the Lakers were left kind of rudderless — and ultimately — hopeless in a 126-113 loss to the Raptors.

Toronto led by as many as 27 before the Lakers closed the gap late with the game long decided. Dennis Schroder scored 18, Russell Westbrook and Thomas Bryant each had 16 and Damian Jones had 10 points and 10 rebounds in the loss.

Pascal Siakam and Fred VanVleet led the Raptors with 25 each.

Juan Toscano-Anderson, one of the players tasked with playing bigger minutes, had to leave the game after suffering a leg injury. He put no weight on his right foot as he was helped to the back.