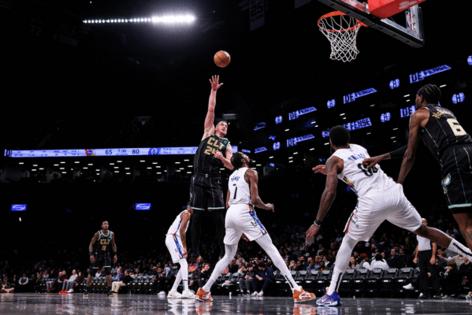 As evidenced by the Nets’ meltdown in their 122-118 win over the Charlotte Hornets on Wednesday, that’s much easier said than done.

The Nets were on pace to give Durant a half-day. They led by 23 in the second quarter, largely due to Seth Curry’s hot shooting against his hometown team and Kyrie Irving’s aggressive scoring against Terry Rozier, his understudy on the Boston Celtics who now plays a key role in Charlotte.

The Nets blew the Hornets out of the water in the first half. The game was supposed to be over.

And then they took their foot off the gas. They left Durant on the bench far too long, then lost those minutes while he watched from the sidelines. This is the other side of the Durant workload conundrum: Yes he leads the NBA in minutes; yes, he’s 34 years old in his 15th NBA season; yes, he’s four seasons removed from a devastating ruptured Achilles; and yes, the Nets want to make sure he’s healthy and fresh for the playoffs.

But when he doesn’t play, the Nets struggle.

The Hornets turned Brooklyn’s 23-point lead into a one-point game until Durant checked back in midway through the fourth quarter. After scoring 20 through the first three periods, he scored nine more down the stretch to secure the victory, giving the Nets their eighth win in their last 11 games.

For the first half of the night, the game plan worked. The Nets went deep into their rotation — and they took care of business against a non-playoff opponent.

Until they took their foot off the gas.

While the Hornets were without franchise cornerstone LaMelo Ball (ankle) and oft-injured star Gordon Hayward (shoulder), the Nets are coming up on a fully healthy 10-man rotation. Ben Simmons (calf strain) and Yuta Watanabe (hamstring strain) are the only key rotation players who missed Wednesday’s game.

Early on, it was too much for the Hornets to handle. Even without Simmons and Watanabe, the Nets flexed the depth they hope can carry them — both in games Durant sits out and minutes he watches from the bench.

Durant did his damage early. On one possession, he crossed over Charlotte’s Kelly Oubre Jr. and drove to the the rim with his right hand before finishing with an emphatic two-handed stuff.

And on other possessions, he did nothing at all. His teammates picked up where he left off.

Three Nets scored 20 or more, with Curry coming off the bench to hang 20 points on his hometown team. Irving scored a game-high 33 points. Even though all five Hornets’ starters scored in double figures, Charlotte got close to nothing from its bench. Curry outscored the Hornets’ reserves on his own.

Not to mention the atrocious Hornets’ defense let Nets’ players walk to the rim uncontested regularly.

The Nets, though, need to find ways to play first half basketball in the second half. It’s the difference between Durant playing his average of 37 minutes a game and playing 25.

Those minutes will add up at the end of the season. When the playoffs come around, he’ll be on the court a minimum of 40 minutes a night.