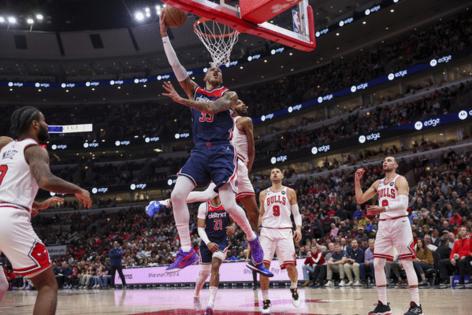 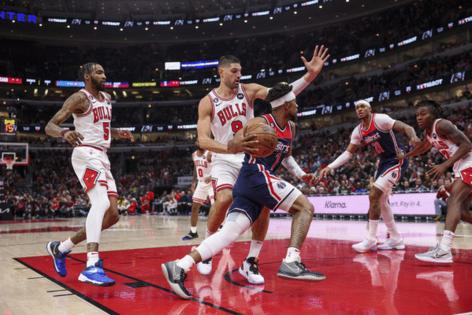 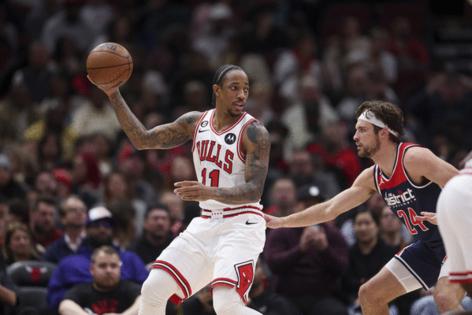 CHICAGO — Javonte Green missed a second straight game Wednesday for the Chicago Bulls, but coach Billy Donovan assured Green he will regain his newfound starting job at power forward whenever he is cleared to return to the court.

Green sat out the 115-111 victory against the Washington Wizards with a bone bruise in his right knee that he suffered Friday in his first start of the season against the Golden State Warriors. Donovan started Green over Patrick Williams in that game in a two-part change to the lineup, also inserting veteran Alex Caruso in place of second-year guard Ayo Dosunmu.

Williams started Wednesday and had 11 points and three rebounds in 30 minutes, while DeMar DeRozan, Zach LaVine and Nikola Vučević combined for 77 points.

While Green’s injury has prevented Donovan from continuing the experiment this week, he said the shake-up remains key to the team’s path forward.

“I get that game-to-game things can change, but when you go through seven, eight, nine games and you’re seeing that things don’t look great, we’ve got to try to move things around,” Donovan said. “I don’t want to say that when you lose games you take a deep dive — you have to look at it regardless of how it’s going — but we want to maintain a level of consistency over 40 minutes.”

Green’s playing time has been inconsistent this season — somewhat surprising after he emerged as a key role player for the Bulls last season, starting 45 games while Williams was out with a wrist injury.

It was understandable that Green’s time would be diminished this season with Williams healthy, but the young forward’s lack of consistency has created competition for the starting position all season.

Despite fewer minutes (16.4 per game, down from 23.4 last season), Green is averaging six points, 3.1 rebounds and a steal. While he’s sidelined indefinitely, the Bulls will turn to Derrick Jones Jr. to assume a greater workload as the backup power forward behind Williams.

“(Jones) has always been ready whenever he’s been called upon,” Donovan said. “Whether it’s been sometimes sitting the first half and then coming in the second half or even being in the rotation, he’s done a really, really good job. I’ve got a lot of confidence in him based on the situations he’s dealt with since he’s been here.”

Protecting the paint has been an area of marked improvement for the Bulls this season. They’re allowing 47.7 points in the paint per game, the sixth-lowest average in the league, while limiting opponents to 11.1 second-chance points, the league low.

Veteran center Andre Drummond has been a major factor in this growth, averaging 7.7 rebounds and 0.4 blocks in only 14.2 minutes per game off the bench. But Drummond’s playing time often is diminished against smaller lineups; he logged only five minutes against the Warriors on Friday and six against the Sacramento Kings on Sunday.

Donovan said that’s necessary to keep the Bulls on pace with smaller teams’ speed off screen action. But it also puts more emphasis on the power forwards to provide rim protection. Green is a key player when the Bulls switch to this lineup, often moving into a stretch-five role to provide defensive length while maintaining speed.

“There’s times where we need to go a little bit smaller, whether it’s switching one through five or getting faster and quicker up the court,” Donovan said. “Sometimes the energy of the game, pace of the game and speed of the game, we need to try to uptick that.

“You’re not going to be able to play everybody all the time. What we’re fighting for is a level of consistency between both the first- and second-unit guys.”

CHAPEL HILL, N.C. — Jason Capel, a Pitt assistant coach and former forward at North Carolina, told the News & Observer that he didn’t want his actions to distract from the Panthers’ 65-64 win in the Dean E. Smith ...Read More