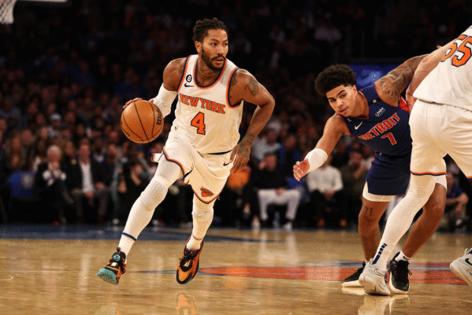 As a veteran on the outskirts of the rotation, Derrick Rose’s circumstances often equate to the trading block.

After all, there are title contenders that could use Rose’s experience and poise in important moments.

But one thing to keep in mind for Rose, who is reportedly being shopped by the Knicks and logged his first healthy DNP of the season Sunday: the 34-year-old former MVP isn’t obsessed with chasing his first NBA title.

Rose said Tuesday that he’s content with the legacy of fighting back from so many devastating injuries to earn a deal paying him $14.5 million this season.

“I just want to be happy playing basketball. Of course if I could get one [championship], that would be great. But I always felt like me being on the court in year 15, that is kind of like a championship for me,” Rose said Tuesday. “Creating a road that – like going into free agency [before re-signing with the Knicks in 2021], there wasn’t anybody I could look to, or compare myself to in the market. I was the first to do it – go from a max [contract], then go minimum, minimum, then get the contract I got now. I was the first to do that. So to be in that position, and just try to create roads for other people. I’m not going to be the last one who did what I did. I’m not going to be the last Derrick Rose. There’s somebody else that goes through trials and tribulations, too.”

Indeed, Rose has been tossed a lot of curveballs in his career. But the latest is something new.

As Tom Thibodeau continues to search for a formula out of the maddening inconsistency, the removals from the rotation of two players deemed important to the franchise before the season — Rose and Cam Reddish — appears to be the path forward.

At least in the short term.

Rose, 34, said he was advised of the change by Thibodeau before his DNP on Sunday, when second-year guard Miles ‘Deuce’ McBride served as the replacement in the rotation.

“He said he wanted to give Deuce a look,” Rose said. “That’s all he told me. So I understood.”