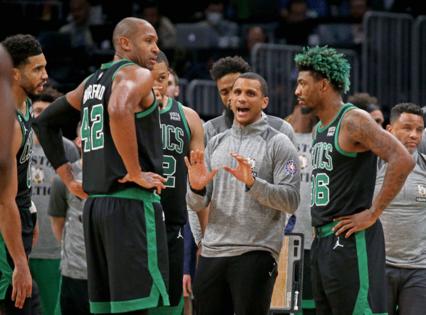 And on Monday, given the circumstances, they picked up one of their best wins of the young season.

The Celtics looked frustrated during the first half. Agitated by the officiating again, Joe Mazzulla got a technical foul as the C’s fell behind by double digits. But on the road, on the second night of a back to back without several key players, the Celtics didn’t fold. They emerged from the halftime locker room on a mission, and behind strong play from Jayson Tatum and Marcus Smart and a game-changing third quarter, the Celtics pulled out an impressive 116-110 victory over the Raptors in Toronto.

Tatum posted 31 points and 12 rebounds, Smart had 18 points and seven assists and Jaylen Brown added 22 points and eight assists as the C’s persevered without Al Horford and Malcolm Brogdon to improve to a league-best 20-5 this season.

The C’s trailed by six after a rough first half in which they shot poorly from long range and struggled against a defensively active Toronto squad, but they did just enough to hang around. Then, they flipped the game in the third quarter.

The C’s increased their defensive intensity and ball pressure, and when the outside shots weren’t falling, they looked to attack the rim. The results were apparent. After sitting out Sunday’s ugly win over the Nets in which his presence was missed, Smart’s play on both ends made a huge impact and Tatum went into takeover mode as he scored 17 of his 31 points in the period, which included several impressive drives and moves around the basket.

The Celtics went on a 23-7 run early in the third quarter as the energy completely shifted and they sustained that momentum. Tatum’s finger roll gave the C’s a 13-point lead – their largest of the night – late in the third and their strong defense led to better offense. Smart had eight points and four assists in the quarter and added several hustle plays as the Celtics turned their six-point halftime deficit into an 11-point lead going into the fourth, where they closed out the win despite a late Raptors run.

Other takeaways and notes from the win:

– Blake Griffin has become a valuable asset off the Celtics bench and he continued to thrive Monday night in his latest spot start for Al Horford, who was resting on the second night of a back to back. Playing in just his fifth game in the last month, Griffin’s fresh legs gave the C’s a lift, especially during a shaky first half in which they struggled at times to generate offense.

For a second consecutive game, the 33-year-old Griffin offered a reminder that he can still fly. Late in the first half, Griffin got the ball in the right corner and faked a shot on Scottie Barnes, then drove to his left and took off for a one-handed dunk with his right hand, drawing a foul in the process. Griffin’s latest highlight play got the entire Celtics bench off its feet and capped a strong half. He finished with a season-best 13 points in a season-high 32 minutes, which also included several hustle plays. He took a charge and grabbed eight rebounds, including three on the offensive glass.

– Horford and Brogdon both missed Monday’s game. Horford sat the second game of a back to back for the sixth time this season, while Brogdon is dealing with a non-COVID illness. Smart returned after missing Sunday’s win with a left hip contusion.