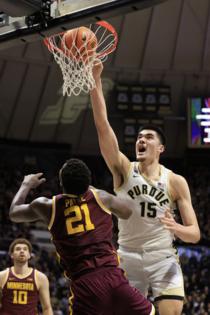 Starting 7-foot center Treyton Thompson didn't make the trip to West Lafayette, Ind., because of an illness, so that meant even fewer fouls to use against the early favorite for national player of the year.

After making it tough early, the Gophers eventually joined every Boilermakers opponent this year being dominated inside by Edey, who had 31 points and 22 rebounds in the U's 89-70 Big Ten-opening loss Sunday at Mackey Arena.

The Gophers (4-4), who host Michigan on Thursday, suffered their third straight loss and haven't won their opening Big Ten game since 2017-18.

The No. 5-ranked Boilermakers (8-0) used a 15-0 run to pull away behind Edey's 16 points and 12 rebounds in the opening period. They outrebounded the Gophers 25-10 and held them to 2-for-13 shooting from three-point range in the first half.

Jamison Battle scored a team-high 21 points on 5-for-10 shooting from three-point range for the Gophers, but it was how overmatched they were in the paint that made the biggest difference.

Thompson's absence meant going smaller with freshmen Joshua Ola-Joseph (6-7) and Pharrel Payne (6-9) in the middle to begin the first half. Payne held his own for as long as he could against Edey, who started 1-for-7 from the field.

Payne even blocked Edey on one possession, but that seemed to just motivate the massive junior from Toronto to take over the game. Ola-Joseph, Payne and Dawson Garcia were all in foul trouble.

Jaden Henley's jumper cut the deficit to 21-15 with 8:22 left in the first half, but the Gophers went through a scoring drought that also plagued them in losses to UNLV and Virginia Tech.

Back-to-back three-pointers from Fletcher Loyer and Brandon Newman followed by Edey's put-back extended it to a 42-20 Purdue advantage.

In the second half, the Gophers were able to make it an 11-point margin even with Garcia picking up his third foul 45 seconds into the period. Braeden Carrington's layup got it within 72-59 with 5:39 to play, but the Boilermakers ended any comeback hopes with an 8-0 run.

Garcia, who finished with six points in 24 minutes coming off flu-like symptoms earlier in the week, fouled out with 1:43 to play. Edey went to the bench as well following his two free throws for an 85-64 lead.

The Gophers gave up 44 points in the paint and were crushed on the boards 41-21 at Purdue.

The schedule won't get any less daunting with the Gophers facing two more opponents led by frontcourt standouts. The Wolverines will come to the Barn with 7-1 center Hunter Dickinson, followed by Mississippi State's 6-10 Tolu Smith on Dec. 11.

Durant, who is out with an MCL sprain in his right knee, sat down with Eddie Gonzalez for an episode of Boardroom’s ‘The ...Read More