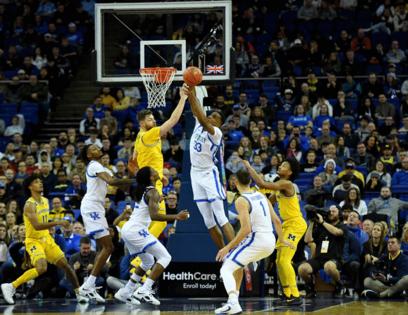 Turns out, all they had to do to beat a quality foe was cross the Atlantic Ocean.

The No. 19-ranked Cats defeated the Michigan Wolverines 73-69 on Sunday evening in London’s O2 Arena, the program’s first trip to Europe for a regular-season game.

Michigan wasn’t ranked, but the Wolverines did start the season at No. 22 in the Associated Press Top 25 poll. They were on the “also receiving votes” list in the latest rankings — technically the No. 32 team in the country — but the Cats will surely be happy with this victory after beating their lesser-regarded foes badly but falling against their only top-flight competition so far.

UK is likely to play just one more game against a ranked team during the calendar year: a Dec. 17 date with No. 21 UCLA in Madison Square Garden for the CBS Sports Classic.

Michigan kept things close throughout Sunday’s contest — and briefly led in the second half — before the Wildcats grinded out the victory.

Oscar Tshiebwe had 13 points and 14 rebounds for the Cats, sitting out some of the second half with foul trouble. Cason Wallace (14 points, eight rebounds and five assists) and Jacob Toppin (14 points) made some big plays in the second half, and Antonio Reeves kept UK on pace early with nine first-half points, going 3-for-3 from three-point range before the break Reeves finished with 11 points.

Wallace’s three-pointer to give a 71-66 lead with 1:11 left as the shot clock ticked down was the last big shot of the game.

Kentucky was 9-for-15 from deep for the game and hit its threes in the first half — 4-for-6 from deep before missing a last-second attempt to beat the halftime buzzer — but struggled elsewhere before the break. The Cats were just 8-for-22 on two-pointers in the first half and made just two of 10 attempts that were designated as two-point jumpers. They were also just six of 11 on free throws.

Still, UK led the Wolverines at halftime, 37-36, and extended that advantage in the opening minutes of the second half, thanks in large part to Wallace’s offensive contributions.