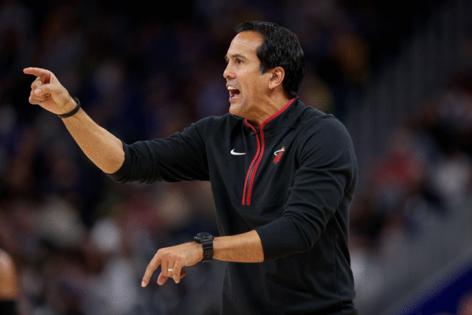 First, appreciate that Erik Spoelstra stands these days far less rigid than when his rise among the NBA all-time leaders in coaching victories began.

He now utilizes zone defense to a staggering degree. While there still can be the occasional, as he calls them, “Hunger Games” practices, they are the exception. There is far more delegating to assistants.

But one aspect where it is particularly difficult to get the Miami Heat’s sideline leader to venture is future thought. It remains about this moment, this season, this attempt to climb back to championship success.

And yet, as the Heat attempt to right their record amid this uneven 2022-23 start, also undeniable is there also is a future to speak about, with Bam Adebayo and Tyler Herro developing into an elite pick-and-roll combination, their combined $300 million-plus in extensions seemingly a bridge to the next chapter of Pat Riley’s roster makeovers.

Which brings it back to Spoelstra, who these days merely is attempting to manage the moment.

“That’s not even on my mind right now,” he says, somehow both politely and curtly. “Yes, if you’re a Heat fan, you can feel great about the future with the young talent that we have under contract and then the young, talented players that we’ve developed.

“I think we have a very good blend of veteran, experienced playoff-tested players. But also our youthful players have significant playoff experience, more so than a lot of other younger players at equivalent age. And I think that makes our team unique.”

While Spoelstra has made his youth earn their way, be it Adebayo having to wait out Hassan Whiteside for a starting role, or Herro not becoming a full-time starter until this fourth NBA season, Spoelstra says general manager Andy Elisburg has skillfully crafted a formula that addresses both present and future.

“Andy always talks about that,” Spoelstra says during a break on this four-game trip, “putting together a roster of veteran talent, guys mid-veteran in their prime, and youth that can give you energy, give you that enthusiasm in the middle of the season.