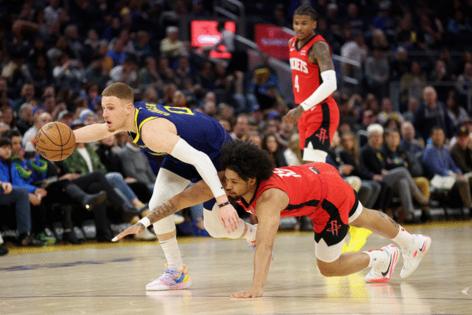 SAN FRANCISCO — Andrew Wiggins doesn’t want the attention. But all eyes were on the Golden State Warriors wing Saturday evening in the Warriors 120-101 smackdown of the young Houston Rockets.

Wiggins had fans lunging out of their seats with every 3-pointer he took in a sizzling third quarter, during which he scored 17 of his season-high 36 points. Wiggins went 5-for-7 from downtown as he led the Warriors to their 10th straight home win.

All said, Wiggins tallied a career-high eight 3s in what was his best offensive night of the season.

Wiggins wasn’t the only one hot from beyond the arc. Stephen Curry and Jordan Poole went a combined 13-for-25 from deep. The Warriors are only the second team in NBA history to make 20 or more 3s four times in a five-game span.

Curry, who remained in the game after appearing to injure his foot in the third quarter when landing awkwardly on a missed layup, finished with 30 points and 10 assists and Poole added 21.

Klay Thompson was notably missing from the starting unit. He has yet to play in both ends of a back-to-back since he returned last January from two major injuries, though coach Steve Kerr hinted pregame that could change later this season. Thompson’s absence paved the way for Moses Moody minutes. The second-year guard has been a casualty of what Kerr has called a “numbers game” and hadn’t played in three of the last four games entering Saturday.

Moody hit a pair of timely 3s in the fourth — the first to stop a 9-0 run by the Rockets who were rallying back from a double-digit hole — and another later to extend the Warriors’ lead to 10 with less than five minutes remaining. He finished with 11 points on 4 of 5 shooting in 17 minutes.

The Warriors improve to 11-1 at home and 13-11 overall. They host the Indiana Pacers Monday night before hitting the road for a quick trip to Salt Lake City, Utah, to play the Jazz.