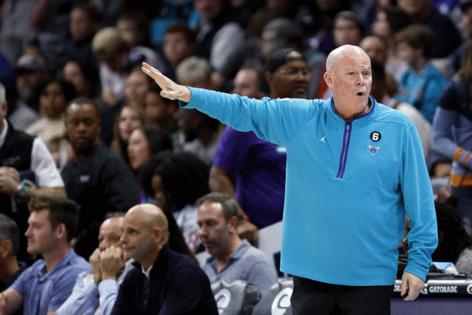 CHARLOTTE, N.C. — The number of star players wearing expensive clothing rather than uniforms inside the Spectrum Center on Saturday was higher than usual, multiplied because the Hornets’ opponent, Milwaukee, was resting its All-Star and other key team members.

With the Bucks playing without Giannis Antetokounmpo, Khris Middleton and Jrue Holiday, the Charlotte Hornets had an opportunity to take advantage of a lineup devoid of most of its top firepower and keep their recent success at home going.

Considering Milwaukee was on the tail end of a back-to-back, and the Hornets were once again without LaMelo Ball, Gordon Hayward, Dennis Smith Jr. and Cody Martin, this had the makings of a more evenly matched contest.

Instead, the Bucks took a cue from the halftime act of Duo Transcend and skated power circles around Charlotte, while the Hornets were lethargic in a 105-96 loss.

Here are some key takeaways from the Hornets’ second defeat in their last three games:

The problem? That’s about all they could hit against Milwaukee.

Shots were clanking off the rim the entire evening, a frustrating display even for the team featuring the league’s next-to-worst field goal percentage. Charlotte’s offensive doldrums were a result of them making 34 of 87 attempts, and they were atrocious beyond the 3-point arc, knocking down just 5 of 24 attempts.

No one’s shooting funk was as bad as PJ Washington’s. Way off with his stroke, Washington misfired on all 13 attempts from the field and went scoreless. He couldn’t negate the offensive production of noted Hornet killer Bobby Portis Jr. (20 points, eight rebounds, seven assists), who burst out of the gate with 11 first-quarter points to set the tone.