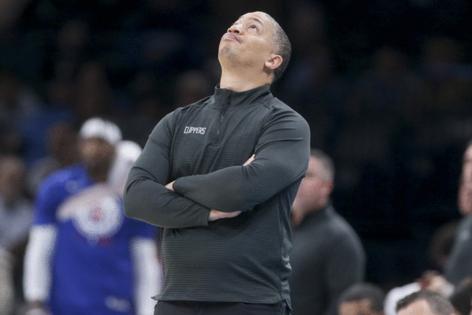 LOS ANGELES — The participation of Kawhi Leonard and Paul George in practice Friday wasn't a precursor to the injured stars' return, after all.

It only continued the pause surrounding their eventual returns, the All-Star duo watching in street clothes from the bench while their Clippers teammates were overwhelmed in a 123-96 loss Saturday afternoon at Crypto.com Arena.

Backup guard Norman Powell, on a scoring tear for three weeks before injuring his groin Tuesday in Portland, sat out a second consecutive game. As the Kings' lead ballooned to 28 points before halftime, Powell rested his chin on his right hand, his expression conveying the emotion of this rout.

The closest the Clippers came to putting life into the arena came when a young lineup pulled to within 16 points with 10 minutes to play.

The Kings then restored order by scoring nine consecutive points.

Brandon Boston Jr. scored a team-high 18 points, with Ivica Zubac contributing 13 points and 15 rebounds, but the Clippers shot an anemic 35% on Saturday.

One day earlier, coach Tyronn Lue had said the team would wait to see how their injured stars felt after practice before determining their availability. Leonard "felt good" after the workout, the coach said — yet missed his sixth consecutive game. A four-game road trip that begins Monday in Charlotte will be the next opportunity for Leonard to appear in what would be his sixth game this season.

More than a quarter of the way through the season, the Clippers' championship ambitions remain possible even after a 13-11 start. The example set last season by eventual finalists Boston — just 20-21 last January before a pulverizing defensive turnaround — and Golden State — which was mired in defensive issues as late as March — underscored the patience that should be exercised before writing off a contender with a deep bench and backed by deep pockets.

Yet reaching the form the Clippers expected from themselves during the preseason will take more than solely improving on their core issues of reducing turnovers, making more free throws and cutting down their shot differential. The Clippers are outscoring opponents by 38 points in George and Leonard's minutes this season — a total that reaches only 65 minutes, however.

For context, Phoenix has surged to a West-leading 15-7 record behind Devin Booker and Mikal Bridges' 687 minutes together. And it's no coincidence that Jayson Tatum and Jaylen Brown have spent 530 minutes together amid Boston's league-best 18-5 start.

Sacramento (12-9), a franchise mocked throughout its 16-season playoff drought, has become a trendy team to watch in coach Mike Brown's first season. After victories this season the Kings light a laser atop their home arena that can be seen for miles — a practice that has taken on cult status, with a section of fans even chanting "Light the beam!" in the final minutes of Saturday's blowout.

For their own part, the Clippers might start lighting a prayer candle in hopes their roster can return to whole.

At times Saturday the Clippers who were playing were doing so while hobbling. Point guard Reggie Jackson, who felt back spasms after falling hard Tuesday in Portland, fell again two minutes into the first quarter against Sacramento on an attempted handoff to Zubac. The ball and Jackson went out of bounds and only the model made by Wilson bounced up quickly.

The point guard labored down the court for several possessions before briefly going to the locker room. Jackson acknowledged hearing his name yelled by a fan late in the first quarter by raising a thumb. He was not ruled out, however, and played 23 minutes despite rarely appearing to play without some level of discomfort.

Jackson would make one of 12 shots and finished with zero assists. Forward Marcus Morris Sr. made two of 11 shots. One of the few dependable offensive options all season after entering training camp healthy, Morris has hit a rough skid shooting, making 26% of his shots in the last week, including five of his 21 3-pointers.

In a move Lue hinted at a day earlier, rookie Moussa Diabate continued to receive more minutes, this time as the backup to Zubac, the role once held by Moses Brown. Diabate entered in the first quarter and eventually played 18 minutes, finishing with four points and five rebounds.