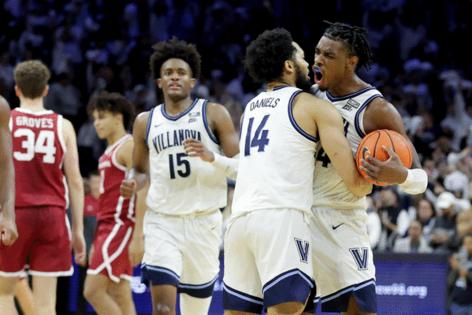 PHILADELPHIA — The debut of freshman phenom Cam Whitmore added some extra energy inside Wells Fargo Center Saturday afternoon in what felt like a must-win game for a struggling Villanova men’s basketball team.

Caleb Daniels seemed to feed off it.

The Wildcats’ graduate senior led all scorers with 22 points, including a critical 3-pointer with 51 seconds on the clock to help Villanova snap a four-game losing streak with a 70-66 win over Oklahoma.

While Daniels led the way for Villanova (3-5), Eric Dixon added 12 points and Mark Armstrong had 10. Whitmore scored seven points in his debut, all in the first half. Chris Arcidiacono hit two 3s for six points. He hit a key triple with four minutes, 55 seconds to play to cut a four-point deficit to a single point, part of an 11-2 Villanova run that was capped by a Daniels basket at the rim.

Oklahoma’s Grant Sherfield made things difficult for Villanova all day. The senior guard scored 21 points (6 of 8 from 3-point range). He had a clean look from beyond the arc and could have tied the game with nine seconds left. Tanner and Jacob Groves scored 14 apiece for the Sooners (6-2).

Following a strong showing out west last week in Portland (19.7 points, 6 rebounds per game over three games), Daniels played nearly the entire game Saturday (37 minutes) and had all the answers for Villanova down the stretch.

He scored in a variety of ways: in the post, from 3-point range and off the dribble. Fifteen of his 22 points came in the second half. He finished 8 of 10 from the floor.

No shot was bigger than his wing 3-pointer as the game clock ticked under a minute and the shot clock was at 4 seconds.