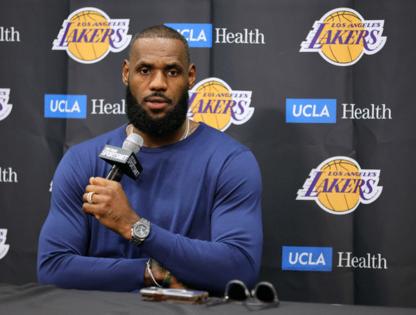 There are a tragic number of instances when LeBron James can drive down most roads in America and see painful examples of racial inequality, but this one is a reach.

After a win on Wednesday night in L.A., the Los Angeles Lakers All-Star forward expressed disappointment over what he perceives as a continued double standard by media coverage.

Let’s start this latest example of people choosing to see what they want with his first two sentences.

LeBron said, “I was wondering why I haven’t gotten a question from you guys about the Jerry Jones photo. But when the Kyrie (Irving) thing was going on, you guys were quick to ask us questions about that.”

Kyrie Irving, the Brooklyn Nets guard who was recently suspended by the NBA for a social media post in which he basically condoned an antisemitic film.

The “Jerry Jones photo” is the now famous shot The Washington Post uncovered in a recent report about the Cowboys owner when he was a 14-year-old student at North Little Rock High School in 1957.

The photo shows Jerry in the background as six Black kids were trying to enroll at the school. Jerry recently told reporters that he was a “curious” kid.

LeBron had been a public Dallas Cowboys fan for decades, and was often spotted at games; in October he admitted he’s no longer a fan of the team because of how Jerry handled the protest movement from NFL players.

Asking a current NBA player about Irving is standard, especially a former teammate.