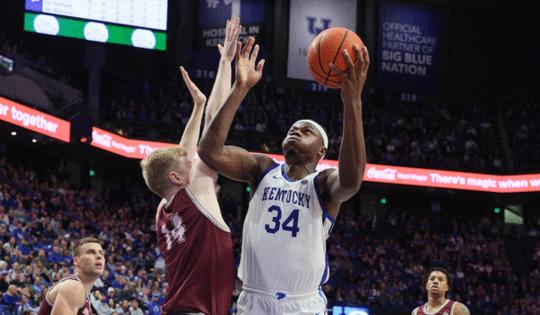 A game that has been years in the making is finally here.

Kentucky will face Michigan on Sunday as part of the Hall of Fame London Showcase, which will be the first time a college basketball game has been played in the city’s O2 Arena and will mark the first time the Wildcats play a regular-season game in Europe.

The matchup with the Wolverines was originally announced in 2019 and scheduled for 2020, but it was postponed two years due to the COVID-19 pandemic. Now it’s time for UK and Michigan to meet in England’s capital.

But why exactly are the Wildcats and Wolverines doing this? Traveling overseas in the middle of their seasons to play a basketball game on foreign soil?

UK coach John Calipari said the plan spawned from discussions with Michigan coach Juwan Howard regarding the possibility of a home-and-home series between the two programs. Calipari has been looking for more marquee non-conference games in Rupp Arena to bolster the Cats’ home schedule amid the annual neutral-site obligations like the Champions Classic and CBS Sports Classic.

The UK coach said he’d known Howard for a long time — “Really like him,” Calipari added — and began talking with the Michigan coach about scheduling. Around that time, officials with the Naismith Hall of Fame reached out about playing a game in London.

The original plan was for this international trip to be a third game in the Kentucky-Michigan series, with the other two played at home sites. Calipari has said multiple times in the past few weeks that the Wolverines will be visiting Rupp Arena next season, though there’s been no official announcement of that or any new timetable for the Cats to play in Ann Arbor.

The London game is set, however, and it should be a unique trip for both clubs.

“It’ll be a great experience,” Calipari said. “And when you’re doing what I’m doing, you’re trying to put these kids in different situations where they learn and grow.”

When he was coaching at UMass nearly three decades ago, Calipari took his Minutemen on a similar midseason excursion. During the 1994-95 season, UMass traveled to France for the Buckler Christmas Classic, a series of games from Dec. 27-31 against some European pro teams. The Minutemen lost all three games they played on that trip — and didn’t play any countable regular-season games from Dec. 17 to Jan. 3 as a result of the travel — but Calipari looks back fondly on the event.