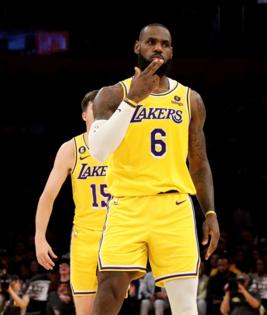 Jones, the owner of the Dallas Cowboys, appears in a resurfaced 1957 image showing a group of white students blocking Black students from entering an Arkansas high school.

“That Jerry Jones photo is one of those moments that our people, Black people, have been through in America,” James said Wednesday after his Los Angeles Lakers’ game against the Portland Trail Blazers.

Jones was 14 when the photo, which The Washington Post published last week, was taken during the integration of North Little Rock High School.

“It seems like, to me, the whole Jerry Jones situation, photo — and I know it was years and years ago, and we all make mistakes ... it’s just been buried under, ‘Oh, it happened. OK, we just move on,’ ” James said Wednesday.

The 80-year-old Jones described himself as a “curious kid” who didn’t realize the magnitude of the event that day, telling reporters last week, “I’m sure glad that we’re a long way from that.”

James, who played with Irving on the Cleveland Cavaliers, was asked Nov. 5 about Irving sharing a antisemitic documentary on social media.

The Brooklyn Nets suspended Irving amid the controversy. Irving, who initially denied promoting antisemitism with his post, has since apologized.

James tweeted he believed Irving should be able to play after apologizing. Irving sat out eight games before returning to the Nets’ lineup on Nov. 20.

The names have been out there and will continue to be out there when it comes to Miami Heat trade speculation.

CHICAGO — Amid the swirling uncertainty of WNBA free agency, the Chicago Sky made a major addition this week — to their front office, not their roster.

The Sky hired Nadia Rawlinson for a newly created role of ...Read More

ATLANTA — The Atlanta Hawks allowed the Los Angeles Clippers to knock down 19 3-pointers on Saturday night and fell 120-113 at State Farm Arena.

1. Despite hustling on both ends of the floor...Read More

BOSTON — The road trips have been long, the games have been stacked and, inside the Los Angeles Lakers’ locker room, the eyes have been droopier. The NBA schedule is long — the comparisons to a marathon too accurate...Read More

BOSTON — As the Celtics backpedaled into a rare losing streak this week, Jaylen Brown took the blame. His pair of free throws with seconds left in overtime cost them, and he took accountability for not bringing the right...Read More

ORLANDO, Fla. — For most of Saturday, the Orlando Magic’s 128-109 home loss to the Chicago Bulls looked like it was going to go how most of their games on the second night of a back-to-back have gone.