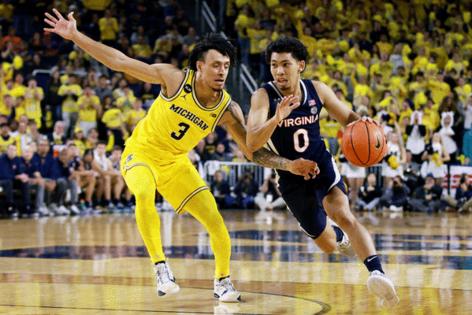 ANN ARBOR, Mich. — The ACC/Big Ten Challenge has had its share of entertaining games and memorable moments over the past two decades.

With the curtains closing on the interconference series after this season, the Wolverines looked like they were on their way to writing a fitting final chapter.

Instead, Michigan let an 11-point lead slip away and stumbled in the final minute to kick off a critical week with a crushing 70-68 loss to No. 3 Virginia on Tuesday night at Crisler Center.

Junior center Hunter Dickinson had 23 points and seven rebounds for Michigan (5-2), which shot 53.1% from the field (26-for-49) but was held to 23 second-half points. Freshman wing Jett Howard scored 15 and couldn’t get off a contested 3-point shot at the buzzer, while sophomore guard Kobe Bufkin added 11 points.

The momentum from Michigan’s strong first half didn’t carry over as Virginia came ripping and roaring out the break. The Cavaliers carved up the Wolverines’ defense and made six straight shots to pull within 50-48, forcing Michigan coach Juwan Howard to call a timeout with 15:33 remaining.

The Wolverines managed to weather the storm and stabilize things to keep the Cavaliers at bay. After a floater from Howard quelled Virginia’s momentum, Dickinson found junior forward Terrance Williams II on a cut for a layup, blocked a shot on the other end and then added two free throws to make it a six-point game.

Michigan, though, struggled to stay ahead. A hook and hold technical foul on Dickinson led to two free throws. The Wolverines turned the ball over on three consecutive possessions. The Cavaliers chipped away and strung together eight unanswered points to take a 60-58 lead with 7:25 to play.

After Bufkin made two free throws to even it, Vander Plas capped a 13-2 spurt with a 3-pointer to give Virginia a five-point edge. The Wolverines swung back. Dickinson tipped in his own missed layup to snap a seven-minute field-goal drought and even it at 65 with 3:27 left.

That set the stage for a tense finish. Dickinson split a pair of free throws to give Michigan a one-point edge at the 1:42 mark, but the Wolverines couldn’t put the Cavaliers away.