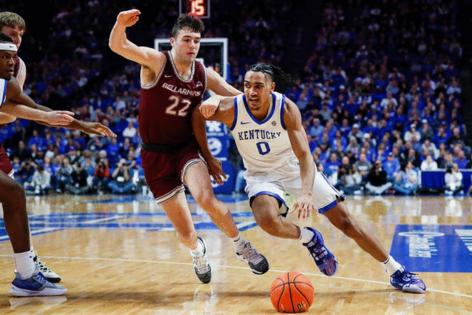 Five things you need to know from the No. 19 Kentucky Wildcats’ 60-41 win over the Bellarmine Knights in NCAA men’s college basketball at Rupp Arena at Central Bank Center in downtown Lexington:

The visiting Knights controlled the first 28 minutes of the game with their deliberate offensive system and sagging defense. At halftime, the score was tied at 21. For Kentucky, it was the fewest point scored in a first half since the 2005-06 Wildcats tallied 20 against Vanderbilt (who had 23) on Jan. 10, 2006, en route to a 57-52 loss to the Commodores.

Against a sagging Bellarmine defense, UK made only 9-of-30 first-half shots, 2-of-11 treys and turned the ball over nine times.

After halftime, Bellarmine came out and hit four of its first five shot attempts and three-straight treys. The Knights led 32-28 at the first under-four-minute timeout (15:21) of the second half.

The game was tied at 32 when Kentucky guard CJ Fredrick, fouled while driving, drained two free throws to put the Cats ahead to stay. A pair of Jacob Toppin foul shots pushed the Kentucky lead to 36-32.

When one plays for a traditionally regal college hoops program like the Kentucky Wildcats, it is no easy task to make history.