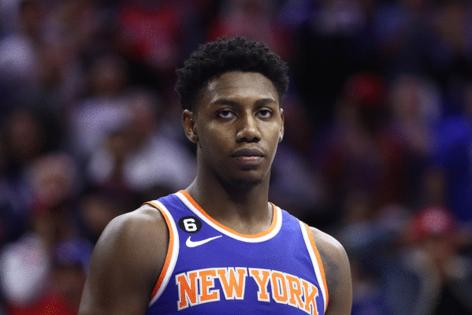 This is an uncomfortable topic for a number of reasons, namely that $107 million extension that hasn’t even started yet. There’s so much hope attached to Barrett’s future, the full-on hype of representing the franchise’s highest pick since Patrick Ewing and its first draftee to sign a second contract in 23 years.

Only two months ago, Leon Rose, who is batting well below the Mendoza Line with his moves, justified the extension by making comparisons even Garden propagandists should’ve thought audacious.

Which brings us to the present. And why we’re sitting by the fire for this heart-to-heart.

Barrett, as witnessed through much of his young career, has an issue with efficiency. He misses too much. From too many parts of the court.

There were moments the last two seasons when it appeared Barrett would overcome this deficiency when he converted enough to earn chants at MSG and that big extension. But as Barrett’s role grows in the offense — and as he supplants Julius Randle as the team leader in shot attempts — the problem has only intensified.

In essence, this is a basic math equation. A player shooting 39% overall and 26% from beyond the arc — as Barrett mustered through 19 games — shouldn’t shoot this many times. He owns the team’s worst effective field goal percentage and the team’s most field goal attempts. It’s not a winning formula.

Take away the pandemic season and Barrett is shooting 40.4% for his career, which is about 65 percentage points below the NBA average.