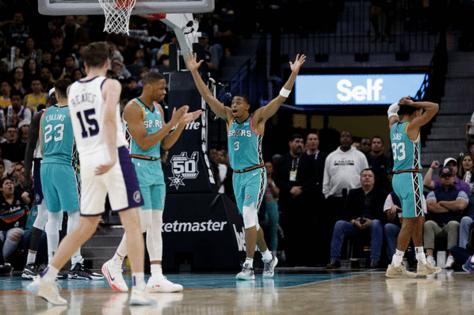 James had watched the Lakers go 3-2 in his absence and Anthony Davis become a force by dropping at least 30 points in four of the games and average 17.4 rebounds over those five games. James also saw Patrick Beverley miss his first of a three-game suspension without pay for shoving Suns center Deandre Ayton during a Lakers game at Phoenix on Tuesday. Dennis Schroder started in place of Beverley.

Although the Lakers lost their way in the third quarter by not playing with purpose and determination, watching a 20-point lead shrink to three early in the fourth, James and the Lakers rebounded to pull out a 105-94 win over the Spurs at AT&T Center for their first road win of the season.

“Well for me, personally, it’s just my rhythm, my timing was a little off on a few of my passes,” James said. “That’s the product of my turnovers. I had six in the first half and cut it in half in the second half. But I’ll be a lot better, obviously, as the games go on, I’ll get my rhythm back. But I felt pretty good to get out there on the court with my guys and make some plays to help them win the game.”

Davis had another double-double with 25 points, on just 13 attempts, and 15 rebounds.

Lonnie Walker IV was in the middle of it all too, scoring 18 points. The Spurs showed a video of Walker from his first four years playing for them, ending with a “Thank You Lonnie” message.

He smiled and waved to the crowd and then played well, as did the rest of the Lakers, who had four players score in double figures.

With the Lakers’ lead down to 81-78 early in the fourth quarter, they had to get their act together after having given up 34 points in the third quarter to make the score close heading into the final period.

“We had three outstanding defensive quarters. We had a lot of slippages in that third quarter,” Lakers coach Darvin Ham said. “We hold them to 21 in the first, (20) in the second, 19 in the fourth. But that 34 points coming out of halftime is very extreme. And it’s something we’ve kind of been struggling with all year. But we kept grinding, kept digging and we were able to right the ship.”

James pushed the ball up court, as the Spurs defense retreated until it was too late, the Lakers forward ending the play with a dunk.

On the next possession, Austin Reaves threw a behind-the-back pass to James for another layup.

The Lakers kept it up, going on an 11-0 run that became a 14-2 stretch that pushed the Lakers’ lead to 95-80 midway through the fourth quarter.

“It was good. I mean, his voice, leadership, his playmaking, scoring ability. I think it all came into effect tonight,” Davis said about James’ return. “He was really good for us in his first game back after missing five, especially down the stretch, pick and roll and calling plays and stuff. I think it was really good for us. Look like he felt good out there. Hopefully he continues to feel good and get ready for the game tomorrow.”

The Lakers play the Spurs here Saturday, making it a back-to-back set and leaving reporters to ask James if he’ll play in that game.

“Yeah, there’s a strong possibility that I play tomorrow,” James said. “I just sat out for two weeks. I’m good.”