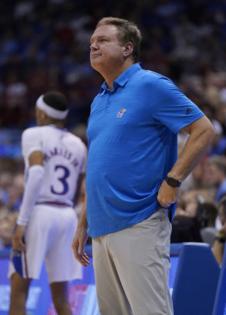 Kansas men’s basketball, which has won 17 consecutive games dating back to the 2021-22 NCAA title campaign, will play for another championship — at the Battle 4 Atlantis — on Friday.

Bobby Pettiford put in an improbable offensive rebound for a basket to beat the overtime buzzer as the Jayhawks (6-0) followed their first-round victory over North Carolina State with a 69-68 overtime win over Wisconsin on Thursday in the Imperial Ballroom of the Atlantis resort in the Bahamas.

Zach Clemence missed a three on KU’s final possession of OT with KU down one and four seconds to play. The ball missed but was tipped from Jalen Wilson to Pettiford, who banked in a short reverse layup for the improbable win.

The Jayhawks survived a game in which they led by as many as 15 points in the second half, only to see Wisconsin tie the score with around 8 minutes to play.

Gradey Dick hit three three-pointers for KU, which has reached the title game in its second appearance in the tourney. In 2013, KU lost in the semifinals of the event to Villanova.

Tyler Wahl scored 23 points for Wisconsin (4-1), which had defeated Dayton in the first round. Wisconsin won this tournament in 2014 and was runner-up in 2018.

Kansas, which opened the game 2-of-16 from the field, went on an 8-1 run to open a 20-12 lead at 7:37. In that run, McCullar had a dunk, Wilson made a three, McCullar added a three and Adams scored an inside bucket. It took McCullar a while to heat up, as he opened the game 0-for-5 shooting and 0-for-4 from three.

PORTLAND, Ore. — No. 1 North Carolina played Portland on Thursday to open the Phil Knight Invitational like it won’t be keeping that top ranking much longer.

Had the Tar Heels not played so unevenly in their first ...Read More

SAN ANTONIO — The NBA deemed that Patrick Beverley’s “history of unsportsmanlike acts” played a major role in the Lakers point guard being suspended for three games without pay for “forcefully shoving” Phoenix...Read More

Yolanda Laney had a motherly instinct that her daughter, Betnijah, was going to be special in the basketball world. She knew it during a workout session at the Mallery Recreation Center in East Germantown, when young ...Read More