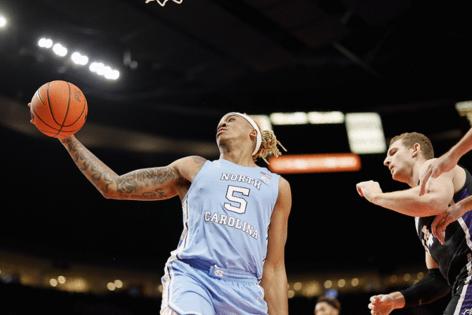 PORTLAND, Ore. — No. 1 North Carolina played Portland on Thursday to open the Phil Knight Invitational like it won’t be keeping that top ranking much longer.

Had the Tar Heels not played so unevenly in their first four games this season, the 10 a.m. local tipoff time at the Moda Center may have been a reasonable excuse for their lethargic play. But this has been a pretty consistent pattern for Carolina.

The Heels survived their Thanksgiving Day matinee with an 89-81 win, and will face the winner of Iowa State-Villanova at 5:30 p.m. on Friday. But they likely won’t get out of the weekend without a loss unless their execution improves.

Carolina jumped out to an 18-8 lead early, but had a sloppy stretch that allowed the Pilots to go on a 10-0 run. From there, it was game on.

Armando Bacot played early on as if he hadn’t quite woken up yet. Portland sent a double team almost every time he had a touch in the paint, and Bacot didn’t respond well.

He had a turnover out of a pass. He got stripped of the ball. He also had one turnover where he dribbled off his foot.

Junior guard Caleb Love carried the Heels in the first half, scoring 16 of his 23 points on 7-for-9 shooting from the field.

But scoring wasn’t the problem for the Heels; they didn’t defend the 3-point line well. Carolina entered the game allowing its opponents to shoot just 29 percent from 3. The Pilots knocked down seven of their 16 attempts in the first half and trailed just 40-38.

Portland grabbed the lead early in the second half and kept it for most of the way until Leaky Black made a 3-pointer from the left corner off an R.J. Davis assist top put UNC ahead for good 76-75.

Pete Nance energized the Heels in the second half, scoring 20 of his career-high tying 28 points. He also set a new career best making five 3-pointers.

Every UNC starter scored double figures in the game. Portland’s 3-pointers dried up in the second half, as the Heels limited them to 5 of 15 shooting from behind the arc.

SAN ANTONIO — The NBA deemed that Patrick Beverley’s “history of unsportsmanlike acts” played a major role in the Lakers point guard being suspended for three games without pay for “forcefully shoving” Phoenix...Read More

Yolanda Laney had a motherly instinct that her daughter, Betnijah, was going to be special in the basketball world. She knew it during a workout session at the Mallery Recreation Center in East Germantown, when young ...Read More