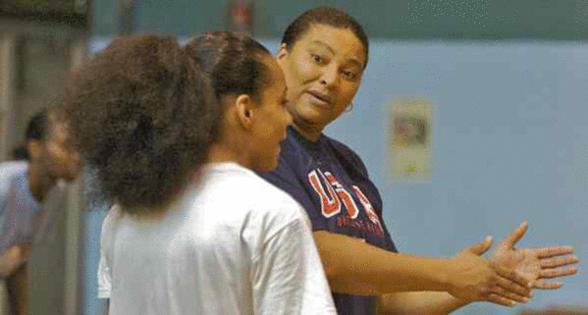 Yolanda Laney had a motherly instinct that her daughter, Betnijah, was going to be special in the basketball world. She knew it during a workout session at the Mallery Recreation Center in East Germantown, when young Betnijah paused to tell her mother, “I love basketball!”

“I got her now,” Yolanda said. “I didn’t tell her that, but I knew once she told me that, I could take her out to train, have her run, ballhandling, and passing. It wouldn’t be an issue, because now I knew since she told me she loved the game, she was going to elevate to the highest level possible.”

Betnijah, who now plays for the New York Liberty, has spent seven seasons in the WNBA, where she has earned a number of accolades throughout her career. Most recently, though, she was awarded the Dawn Staley Community Leadership Award for the work she’s been doing off of the court.

Since joining the Liberty before the 2021 season, Betnijah has used her platform to raise the profile of the league and interact with the New York community, primarily focusing on child development and youth education. She partnered with Coalition for Change to help families with educational support, mental health services, financial literacy, and career placement.

Yolanda always expressed the importance of youth sports to her daughter and wanted Betnijah to give back to the next generation of athletes. The Clayton, Del., native grew up watching her mother coach at recreation centers or AAU teams in Delaware, Philly, and New Jersey while also taking the time to improve Betnijah’s game.

“We were fortunate enough to have our needs met, but you see people around you who don’t have that same opportunity,” Betnijah said. “Everyone deserves to have some kind of resource. That’s just something that my mom has always provided to the community through basketball.

“Her focus was giving back basketball to allow kids to know the game. Growing up seeing my mom do all that she’s done for the community, it’s just something that stuck with me.”

The Germantown native went to University City High School, which closed in 2013. She led the team to three Public League basketball championships and was named Public League player of the year as a junior and senior in 1977-78.

Yolanda also played in the historic Sonny Hill League. She participated in the John Chaney-Sonny Hill basketball camp until her junior year when Hill started a girls’ program called the Developmental Basketball League.