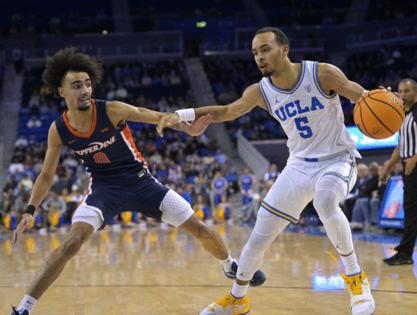 UCLA’s freshman guard was called a nonshooter. The defense he saw reflected those words, players sagging off to give him extra room to shoot while guarding against drives toward the basket.

Pepperdine’s game plan was not without some merit. Bailey had been relatively quiet for the first five games of his college career, including struggles in his first two matchups against nationally ranked teams.

In case anyone needed any reminders as to why he was rated as one of the nation’s top high school prospects, Bailey provided one after another Wednesday night at Pauley Pavilion.

Providing a huge lift on a night the Bruins’ defense returned to its usual stifling form, Bailey scored a career-high 19 points to power the No. 19 Bruins to a 100-53 victory that foiled Pepperdine’s grand defensive plans.

“If you watch the film, they went under the screen and I kind of felt like it was disrespectful, like they were giving me plenty of feet to shoot the ball,” Bailey said, “so I was just taking what the defense was giving me.”

That included showing the many ways he can contribute.

Bailey continually fed freshman center Adem Bona for dunks, once on a bounce pass, a second time on a wraparound pass underneath the basket and a third time on a lob. He hit all three three-pointers he took. And he did, in fact, beat the defense designed to stop his drives, accelerating past a helpless counterpart for a layup.

“We’ve been talking about this for a long time, that you’re not to get to the rim at this level, they’re going to force you to make shots, which he can do,” UCLA coach Mick Cronin said. “You know, he’s just got to accept it and it’s an adjustment. But you saw he was looking to catch and shoot.