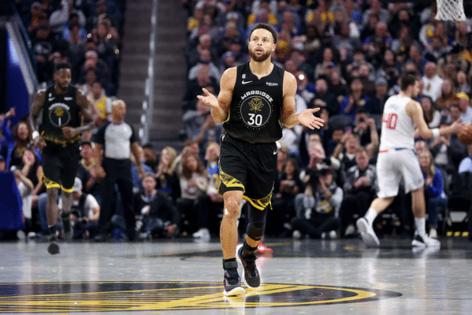 Looking to get right after an ugly loss on the road to New Orleans with the starters sitting, Klay Thompson lit up the first quarter and Andrew Wiggins led with 31 points to lead the Warriors to a 124-107 win on Wednesday night at Chase Center.

The burden to score was off Steph Curry, who switched into a facilitator role and fed his teammates. Wiggins finished the first half with 15 points and finished the game going 6-of-10 from 3, marking consecutive games in which he had six 3-pointers, going an efficient 12-of-18 from the field.

Thompson scored 15 points in the first quarter, going 2-of-4 from 3 and 4-of-6 from the field. Thompson didn’t score in the second or third quarters, but hit his third 3-pointer upon checking in the fourth quarter.

Coach Steve Kerr opted to play Draymond Green with the second unit as a facilitator, a rotation shift that paid off in the Warriors’ win against the Houston Rockets on Sunday. His presence helped limit the mistakes made from a bench unit that’s made a bad habit of squandering leads. The Warriors entered the second half with a 19 point lead. Their 20 assists were tied for most they’ve scored in a half this season.

The Clippers cut that lead in half with a little help from the Warriors, who committed 21 fouls by the start of the fourth quarter and 26 overall, leading to 27 Clippers free throw attempts. Lucky for Golden State, the Clippers missed nine free throws.

But Green’s playmaking helped hold the line. All starters except Jonathan Kuminga (minus-2) finished in the positive of the plus-minus stat before garbage time. And the Warriors flipped the game into a blowout victory by the time Curry and Thompson checked in midway through the fourth quarter. Once the Warriors were up 26 points, Green — who had played 33 minutes — checked out for Kuminga.