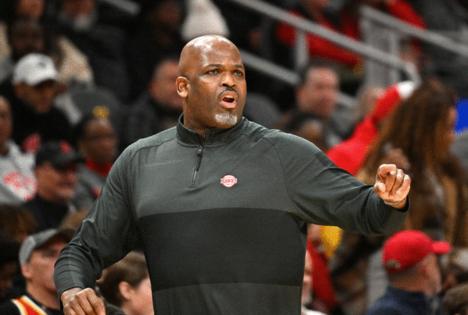 Sacramento’s seven-game winning streak ended with a 115-106 loss to the Hawks on Wednesday at State Farm Arena in Atlanta.

Malik Monk came off the bench to score a team-high 27 points for the Kings (10-7), who had won seven in a row and 10 of 12 to move into a tie for second in the Western Conference.

De’Aaron Fox had 18 points, five rebounds and five assists. Domantas Sabonis recorded his 10th double-double of the season, finishing with 15 points, 14 rebounds and seven assists. The Kings were on the second night of a back-to-back after beating the Memphis Grizzlies, 113-109, on Tuesday to open a three-game road trip.

The Kings didn’t arrive in Atlanta until about 2 a.m. Wednesday following a late-night flight from Memphis. They will conclude the trip when they visit the Boston Celtics on Friday before coming home to face the Phoenix Suns on Monday.

Monk was asked if fatigue was a factor in the loss.

“A little bit of that, man,” Monk said. “We had a back-to-back, a tough game yesterday, and we needed to have extreme focus because we knew we were going to be a little tired. We just came out too easy in the first half and let them have — I think they scored 72 in the first half — and it’s hard to win when you give up 72 points in the first half.”

The Kings trailed 17-8 midway through the first quarter after going 3 of 11 from the field to start the game. Kings coach Mike Brown turned to his bench in search of a spark. He got it from Trey Lyles, who had eight points in his first five minutes of action, and Monk, who scored seven points in three minutes.

The Hawks led 35-26 after shooting 57.7% in the opening period. They extended their lead to double digits early in the second quarter, went up by 15 at the 7:30 mark and led by as many as 19 before taking a 72-57 lead into the halftime break.

The Kings shot 47.7% with 16 assists and only three turnovers in the first half, but they allowed the Hawks to shoot 56.6%. Monk had 15 points on 7-of-9 shooting at the half, including two spectacular dunks, but Sacramento’s starters were outscored 48-29.

The Kings got within 10 early in the second half, but the Hawks pushed their lead back up to 17 on a five-point possession when Fox was whistled for a foul — and then a technical foul — on a 3-point basket by Young. That sequence seemed to light a fire in Fox, who scored three of his team’s next four baskets to spark a 13-4 run as Sacramento came back to cut the deficit to six.

Atlanta led 97-88 going into the fourth quarter, but Sacramento kept coming with Davion Mitchell spearheading the effort on defense. The Kings got within seven on a driving layup by Mitchell, but they couldn’t get any closer.