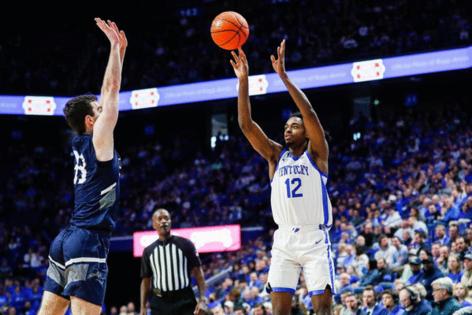 Five things you need to know from the No. 15 Kentucky Wildcats’ 96-56 blowout win over the North Florida Ospreys in NCAA men’s college basketball at Rupp Arena at Central Bank Center in downtown Lexington:

1. Calipari changes starting lineup again. Antonio Reeves, the Illinois state transfer, made his first start as a Kentucky Wildcat — and it appeared to suit him.

The 6-foot-5, 205-pound senior had 18 points by halftime. Reeves hit seven of nine shots, four of five treys and ended the half by beating the buzzer with a 28-foot three-pointer that was set up by an Oscar Tshiebwe steal.

In the second half, Reeves cooled. He missed all three of his shot attempts, all treys. He finished the game with 20 points on 7-of-12 shooting, 4-of-8 three-pointers and 2-of-2 free throws.

2. Oscar flashes his all-around game. Even by Oscar Tshiebwe standards, Wednesday was a bountiful day of stat stuffing.

The reigning National Player of the Year had his normal point/rebounds double-double with 16 points and 15 rebounds, of course. He’s now had one of those in 19 of his past 20 games dating back to last season.

However, Tshiebwe also had five assists, three steals and two blocks. The 6-foot-9, 255-pound senior’s passing out of the post to open shooters was especially sharp.

Tshiebwe was not the only Cats to log a double-double. Senior power forward Jacob Toppin had 20 points and 10 rebounds.

3. Better to give. As the holiday season launches, Kentucky continues to play basketball with a giving spirit.

The Cats finished Wednesday’s game with 23 assists on 35 made baskets.

4. UK home win streak intact. With its victory, Kentucky has now won 23 straight games in Rupp Arena, the longest-active home-court win streak in the SEC. UK last lost in Lexington on Feb. 27, 2021, a 71-67 defeat at the hands of the Florida Gators.

Last season vs. UK, Hendricksen had eight points, five rebounds and an assist but did not shoot well in Rupp Arena, going 3-for-14 from the field, 2-for-10 on treys.

This year, the 6-foot-7, 217-pound product of Mount Sterling had seven points and two boards. Hendricksen hit two of eight shots, one of three treys and two of three free throws.